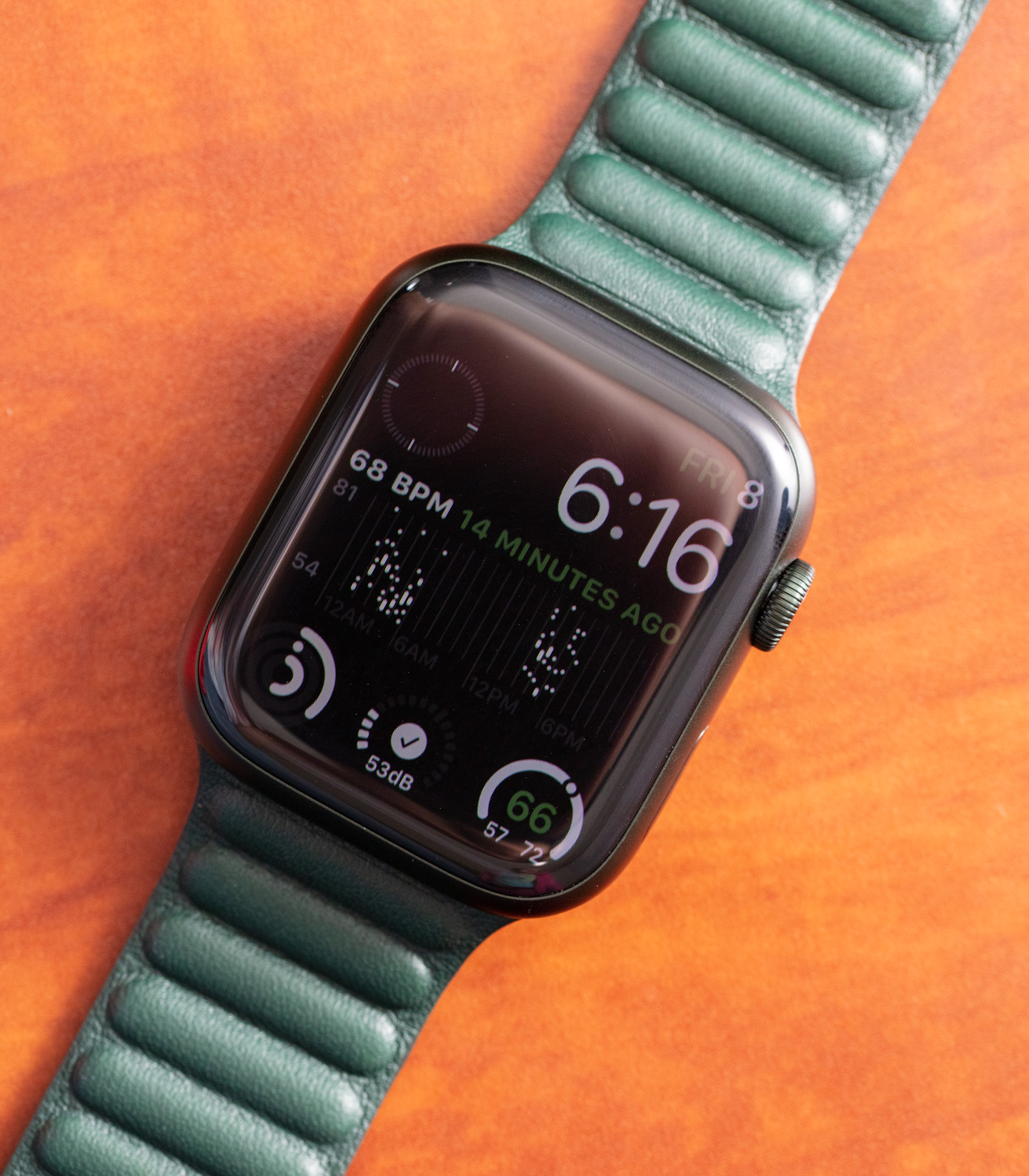 The most recent Apple Watch has arrived, and it's the Apple Watch Series 7, which will begin shipping to purchasers just days after this story is published in mid-October 2021. The Apple Watch Series 7 is an incremental but significant upgrade over previous-generation Apple Watch goods, and today I'm looking at the 45mm-long aluminum-cased version with "Sequoia Green" anodized finishing. The Series 7 will also be available in a steel or titanium case, each with its own color and finish options.

I've always found it intriguing to see how Apple improves its class-leading smartwatch with each subsequent version. In other words, Apple appears to be focusing just as much on enhancing the software experience as it is on improving the hardware experience. Apple Watch Series 7 tweaks are a response to how customers actually use the Apple Watch, as well as how Apple intends to continue evolving this product. 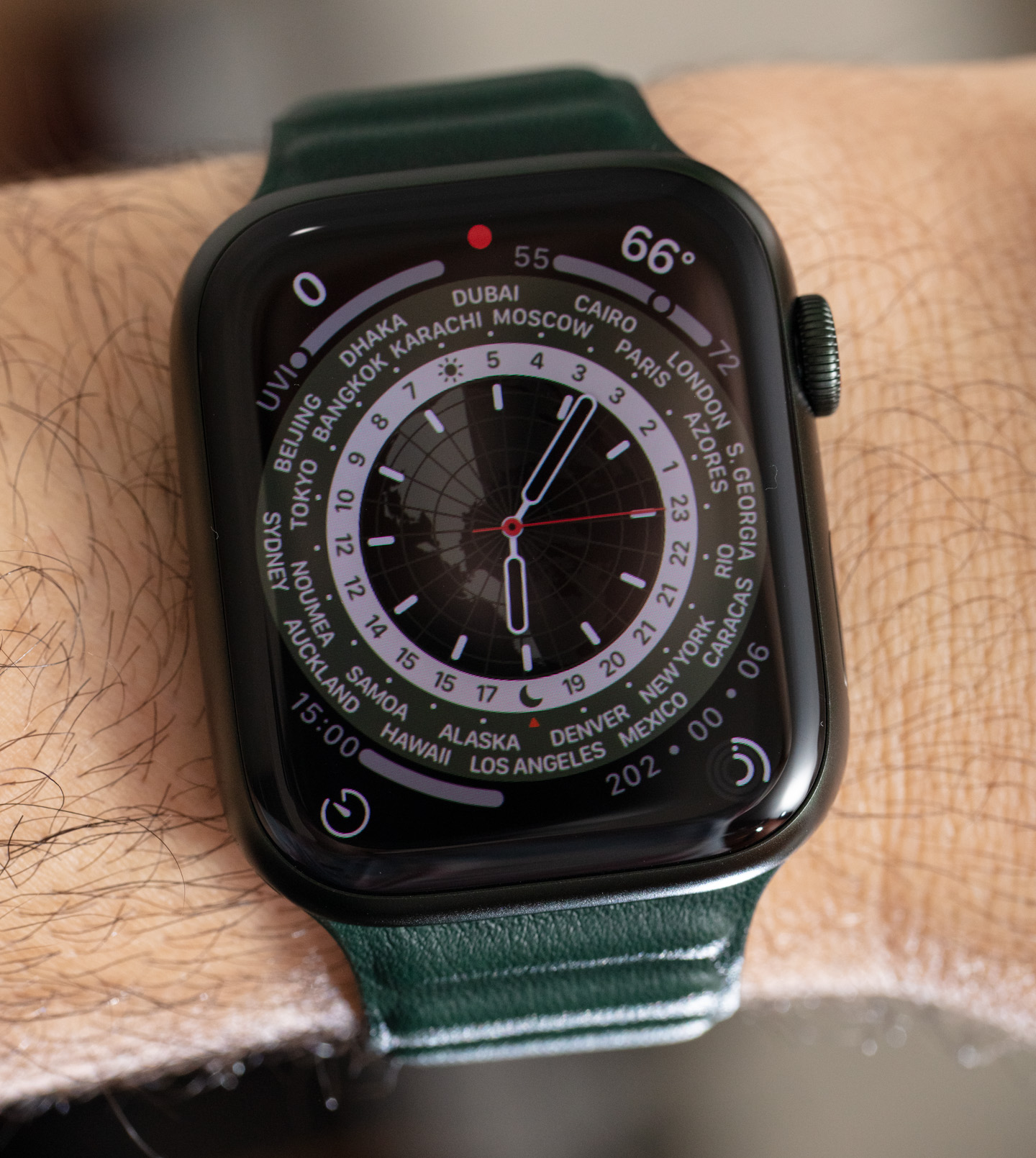 Let's think about that final statement for a moment, since I believe it is critical. Apple appears to be obsessed with data about how people use their Apple Watches, from how many hours they wear it every day to how often they gaze at the screen. People desire a brighter display as well as a larger one, according to Apple. Two of the most noticeable enhancements in the Apple Watch Series 7 are the larger, slightly rounder screen and a brighter screen in always-on mode, which may not be obvious to everyone. I'm not sure if this latter capability is related to a better battery and more efficient processing, or if Apple simply decided that each Apple Watch has enough power in it when the average person goes to charge it, allowing them to route more power to things like the screen backlight during "wearing times." Apple is tight-lipped about its technical team's back-of-the-envelope thinking, but it's worth noting that the smartwatch product team is intensely focused on how wearers actually use and live with their devices. As a result, each model of Apple Watch feels more natural and exchanges information with the wearer automatically. 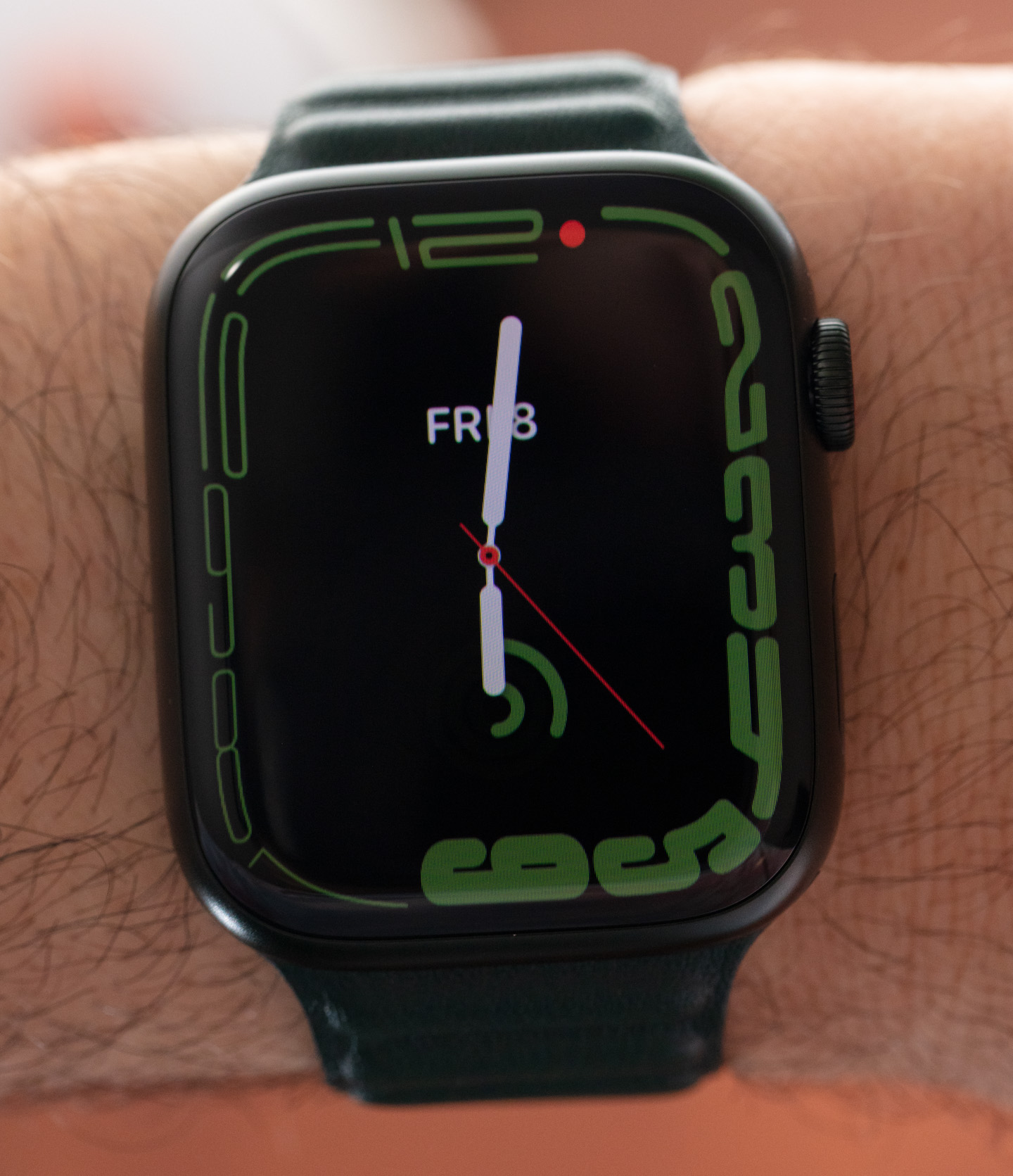 The fitness monitoring tools are a terrific illustration of how Apple continually enhancing the app experience. Apple is well aware that many Apple Watch owners use the device to track their fitness. Apple is increasingly automating activity tracking, such as starting a workout immediately if it detects that the wearer is (say) riding a bicycle. This solves one of the challenges with keeping track of your workouts: users typically forget to tell the watch when a session starts. More importantly, Apple continues to add more niche routines to the Apple Watch, allowing it to provide increasingly more specific feedback. Pilates is one of the newest exercises added to the app, which I was able to complete with the Apple Watch. Knowing that my Apple Watch could correctly "score me" for the exercise I was doing added to the experience. 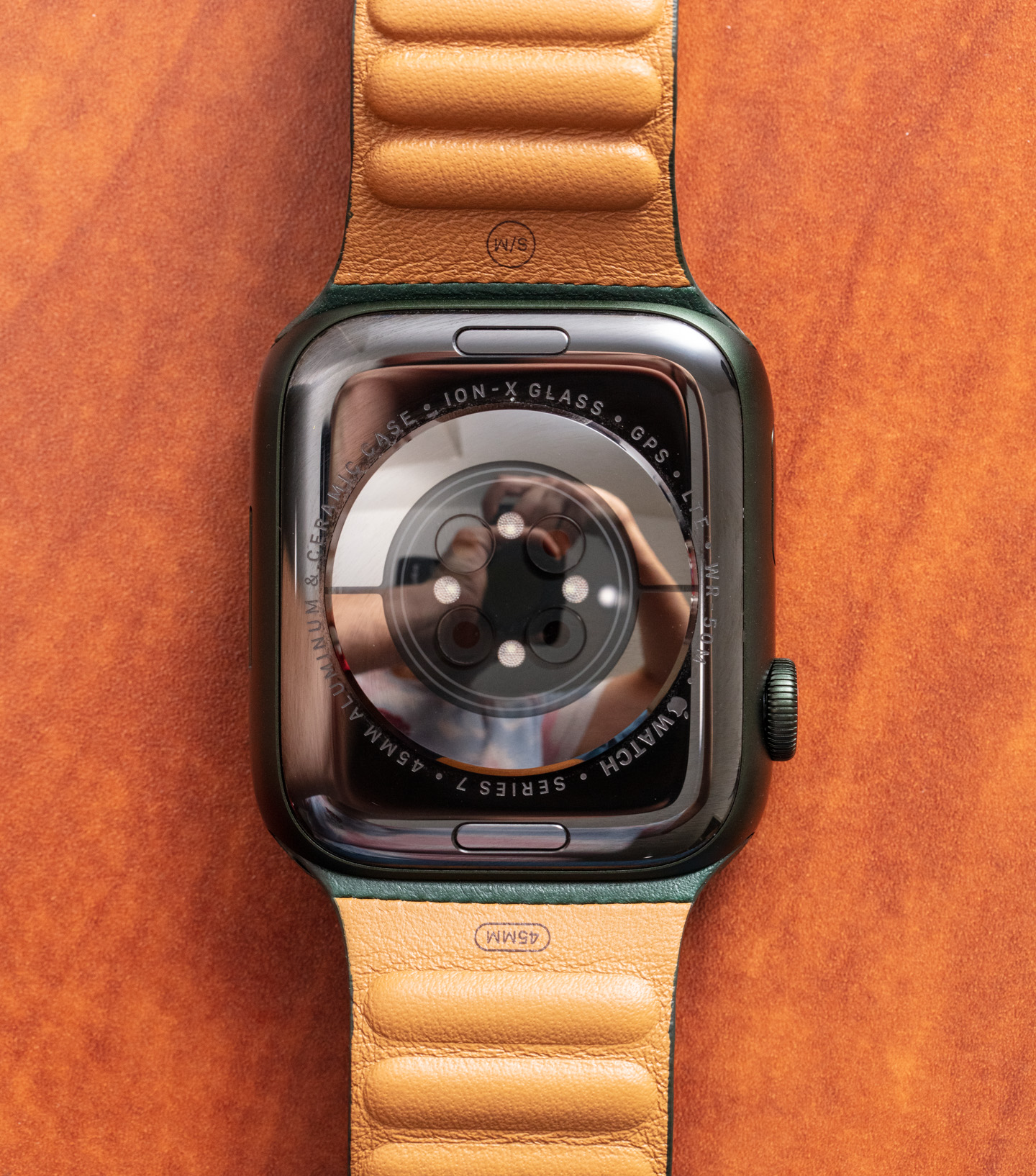 The new Apple Watch's screen, which is believed to be 20% larger than previously, has gotten a lot of attention. Will you be aware of it? That's exactly what I did. The first thing I noticed about the Apple Watch Series 7 was how much larger the screen was than the Apple Watch Series 6. (aBlogtoWatch review here). Because everything (including the default font size) is a little larger, this not only makes the screen more appealing, but it also increases legibility. While I'm not convinced that the screen size and brightness alone warrant an upgrade, this is a significant boost for the Apple Watch product line.

The casing form is also new for 2021. Apple watches are measured in length rather than breadth, and the new Apple Watches are 41mm and 45mm long, respectively. The model on my wrist is the 45mm variant, which includes an anodized aluminum body, a ceramic caseback (which is now standard on all models), and a "Ion-X" screen. For an entry-level model, there's a lot of value here, but I like the materials on the most costly Apple Watches, which have a sapphire crystal and a steel or titanium case. Unless you value lightweight above all else, I believe the steel Apple Watch models offer the best balance of longevity and value. However, you won't be able to obtain all of the interesting color options offered on the Apple Watch Series 7 aluminum (which Apple claims is constructed from 100 percent recyclable aluminum), which now contains five hues in wonderful tones like red and blue, as well as a deeper green tone. 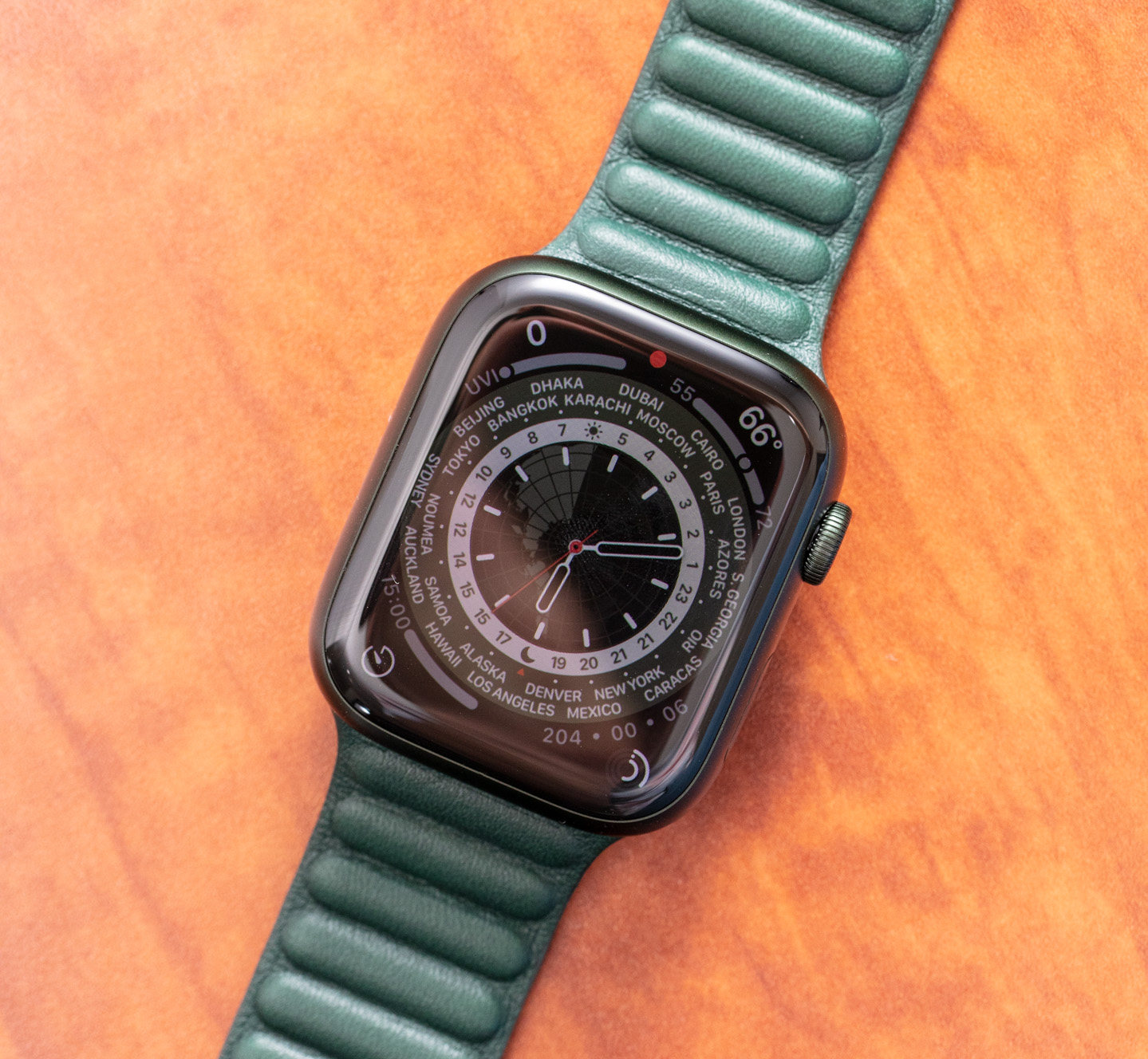 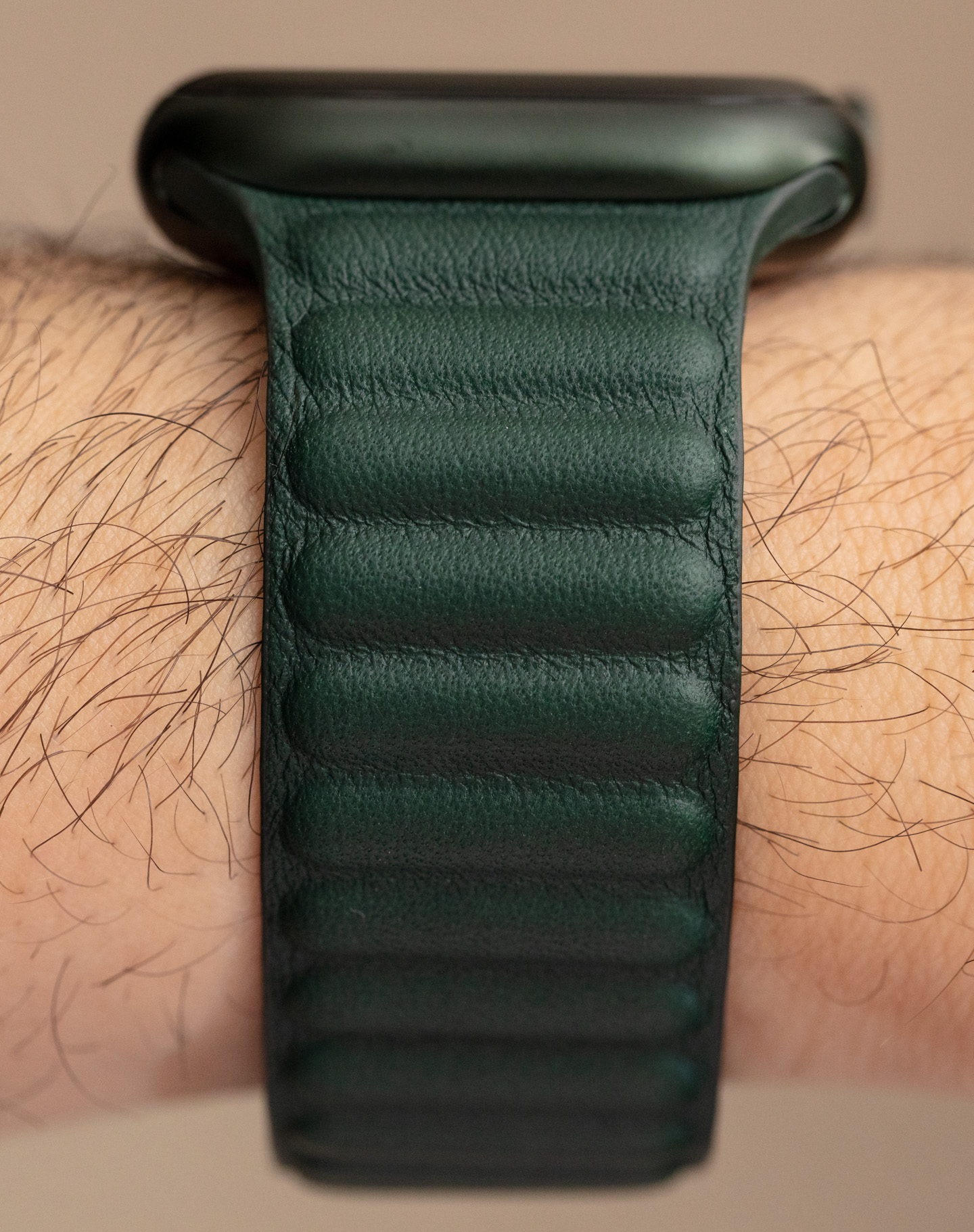 The Apple Watch was reported to have a redesigned form prior to the debut of the Apple Watch Series 7. Although this did occur, the difference in case form is small. The most essential thing is that all of the existing Apple Watch straps are still compatible with the device. I believe it would be extremely difficult for Apple to change the design of the Apple Watch in such a way that its strong array of straps and bands would become obsolete. What we observe is a larger rounding of the casing, which just adds to its elegance. The watch is rapidly taking on its own appealing rounded form and shape, rather than resembling a little iPhone on your wrist. The Apple Watch now has a speedier charge time and a more simple manner of entering text with one finger on a smartwatch-sized QWERTY keyboard. As I previously stated, this is the result of a mix of hardware and software changes. Some capabilities will be available on previous-generation Apple Watches that can be upgraded to the newest Watch OS software, while others will be available only when purchasing the most recent hardware. Another example is the Apple Watch's improved dust resistance, which, like water resistance, is critical in allowing this device to serve its wearers in the widest range of scenarios and settings possible. 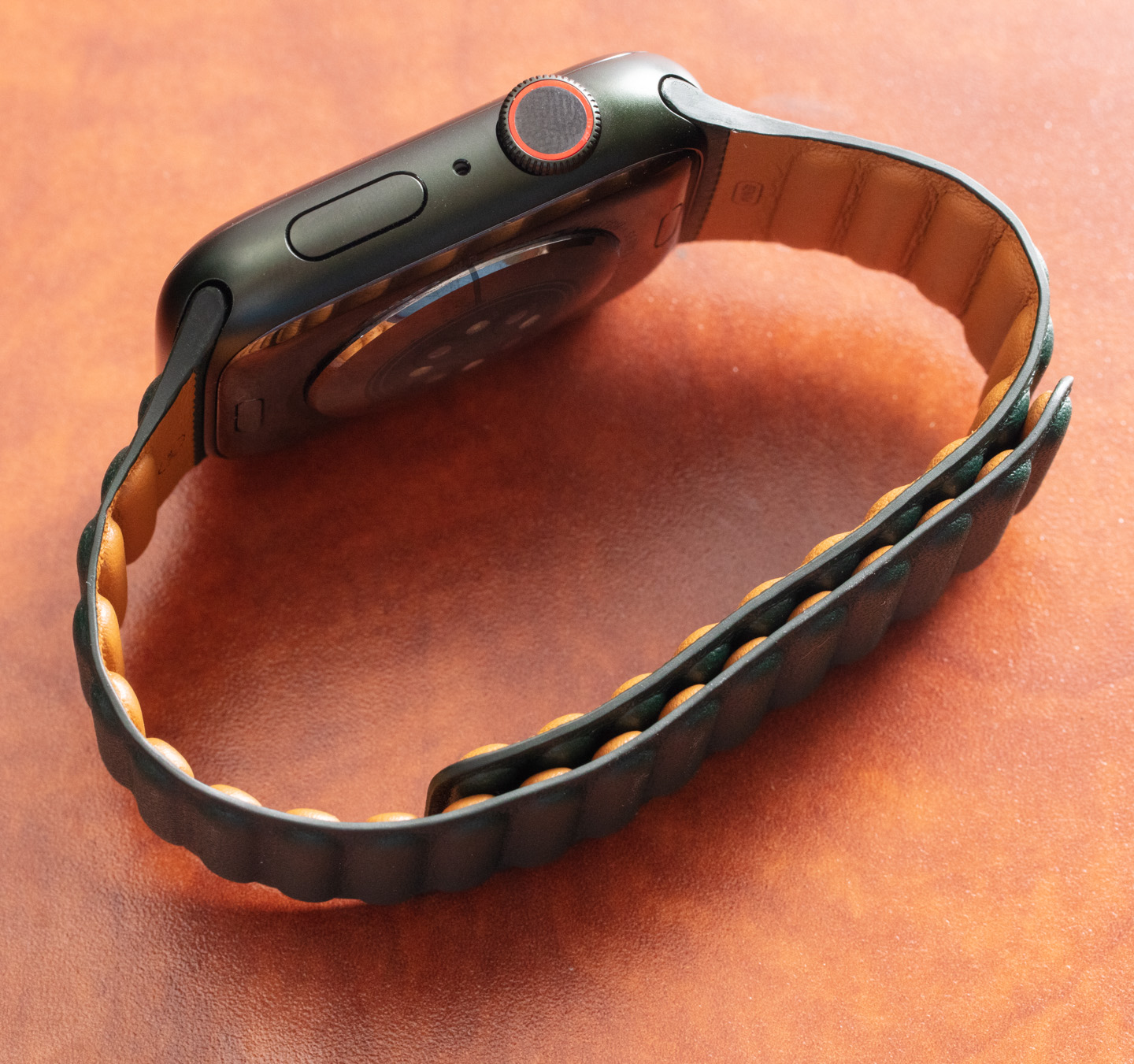 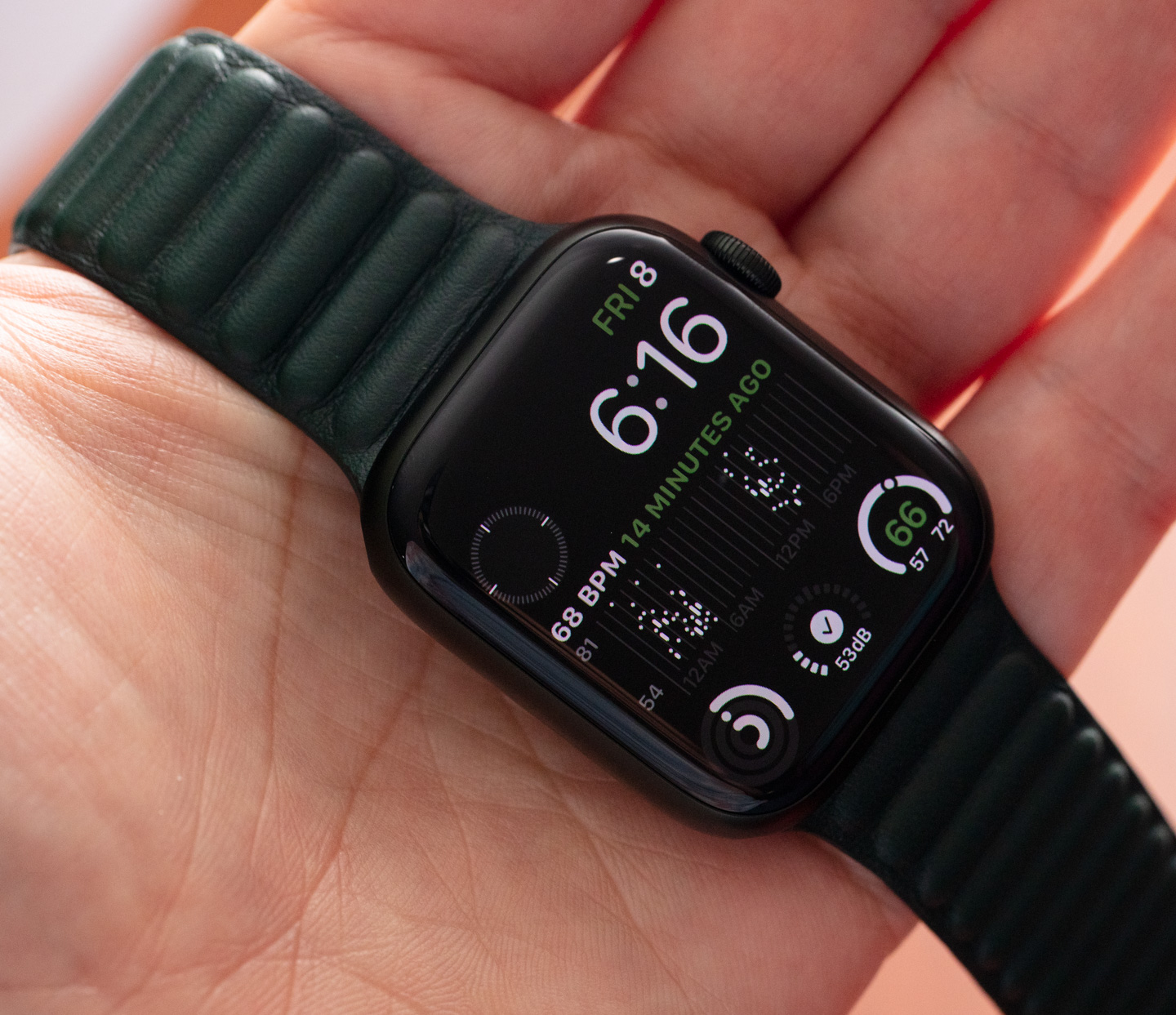 You may have also noticed that this Apple Watch Series 7 comes with a brand-new Leather Link strap from Apple. This is extremely comparable to an Apple Leather Loop strap that was previously available. The leather strap has a number of magnets (bigger this time) that, along with the ridges, keep the strap in place on your wrist. This is one of my favorite-looking Apple Watch straps to date, and it's a wonderful choice for anything save the most strenuous sports, when the watch could be ripped off your wrist. 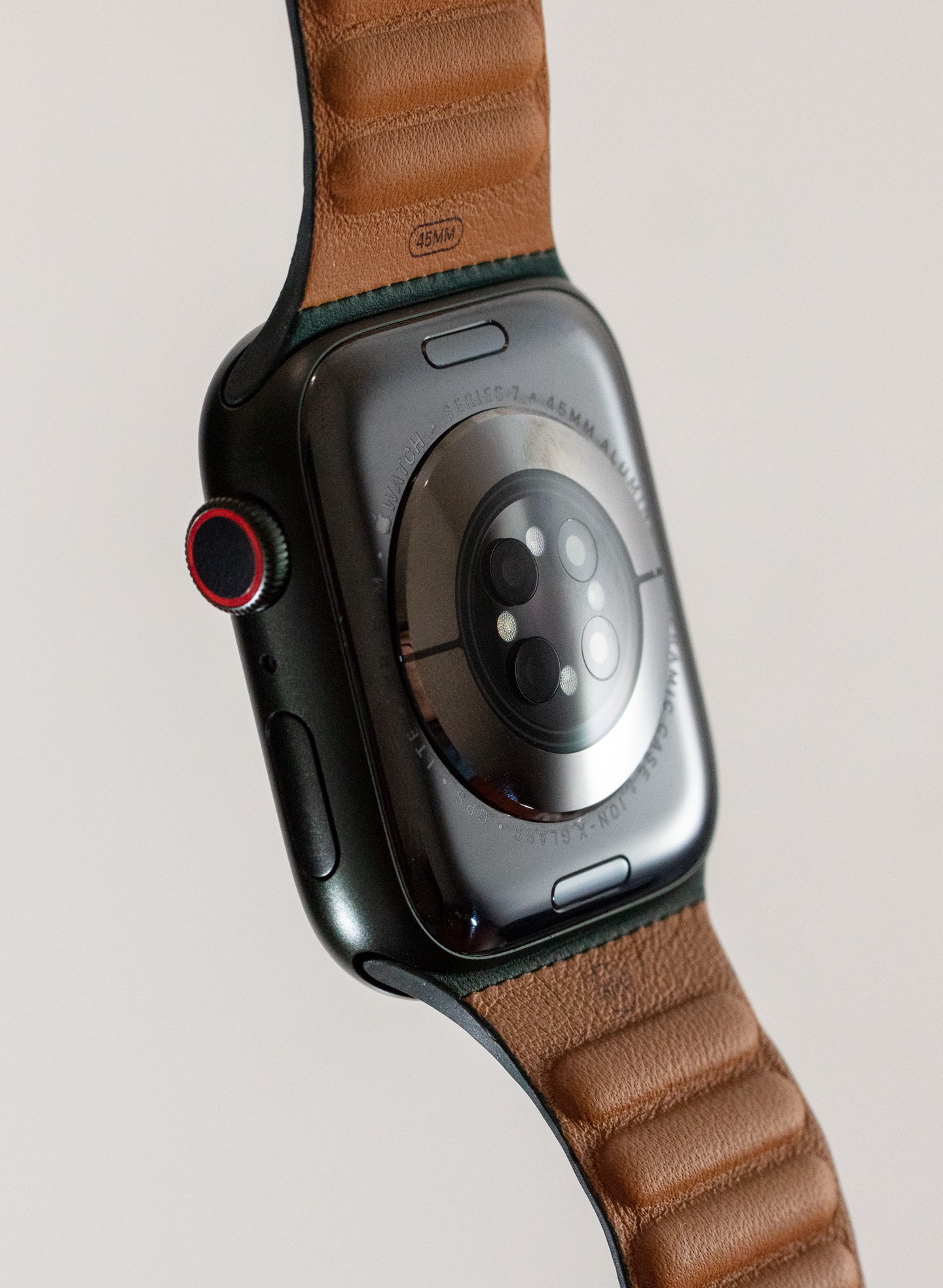 With each new Apple Watch release, Apple adds a few new watch dials (though I crave even more options). The new World Time face, the brand's latest homage to traditional watches, is the most meaningful new dial for wristwatch fans. It's worth noting that every time Apple releases a new watch dial, it strives to come up with something very current while simultaneously offering something very vintage. It's encouraging to hear that the Apple Watch team is focused on appealing to a variety of demographics, including younger watch wearers and those who take a more nostalgic approach to their watch-wearing experience. 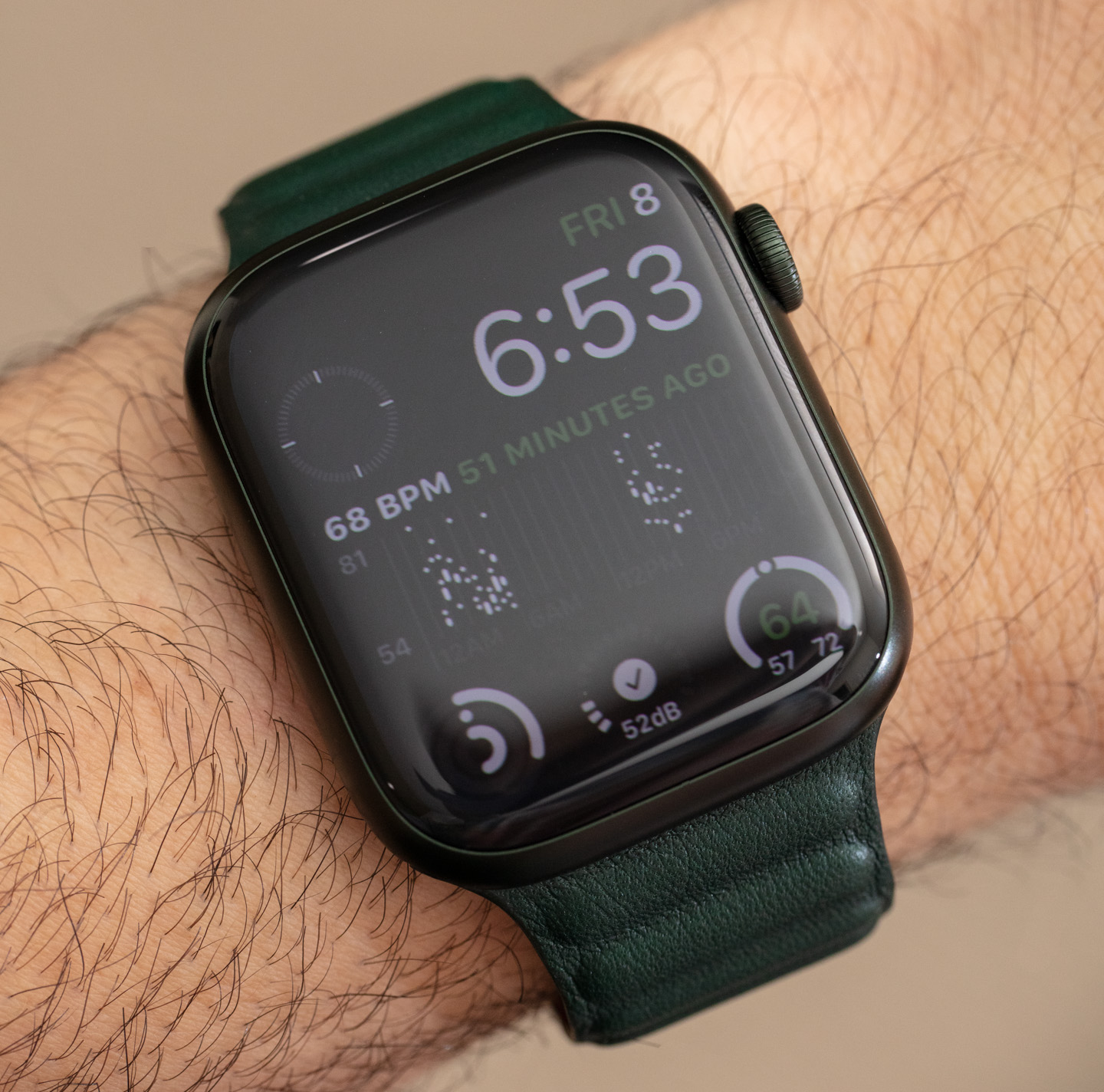 One area where I'd like Apple to continue to improve is its ability to tailor when a person's day begins and ends. Although the program is mainly reliant on the "day/night cycle," it assumes that people have "average" waking and sleeping routines. As a night owl (meaning I am awake at 12 a.m.), measuring my activity level and using other capabilities of the watch creates some peculiar hurdles for me. I'd want to see future versions of the Watch OS software take into account the importance of being able to adapt to different people's awake/sleeping schedules. Perhaps that is already on Apple's list of features to include in future Apple Watch releases.

When it comes to the attractiveness of the Apple Watch, Apple's ability to captivate the fashion audience as well as people wanting the latest technology is astounding. The Apple Watch Series 7's brighter always-on screen will disclose the device's fashion worth to many people, and it's wonderful that the Apple Watch dial is as noticeable as the casing. Apple may not reinvent the Apple Watch with each version, but the new Apple Watch always feels solid and appealing, both physically and functionally.