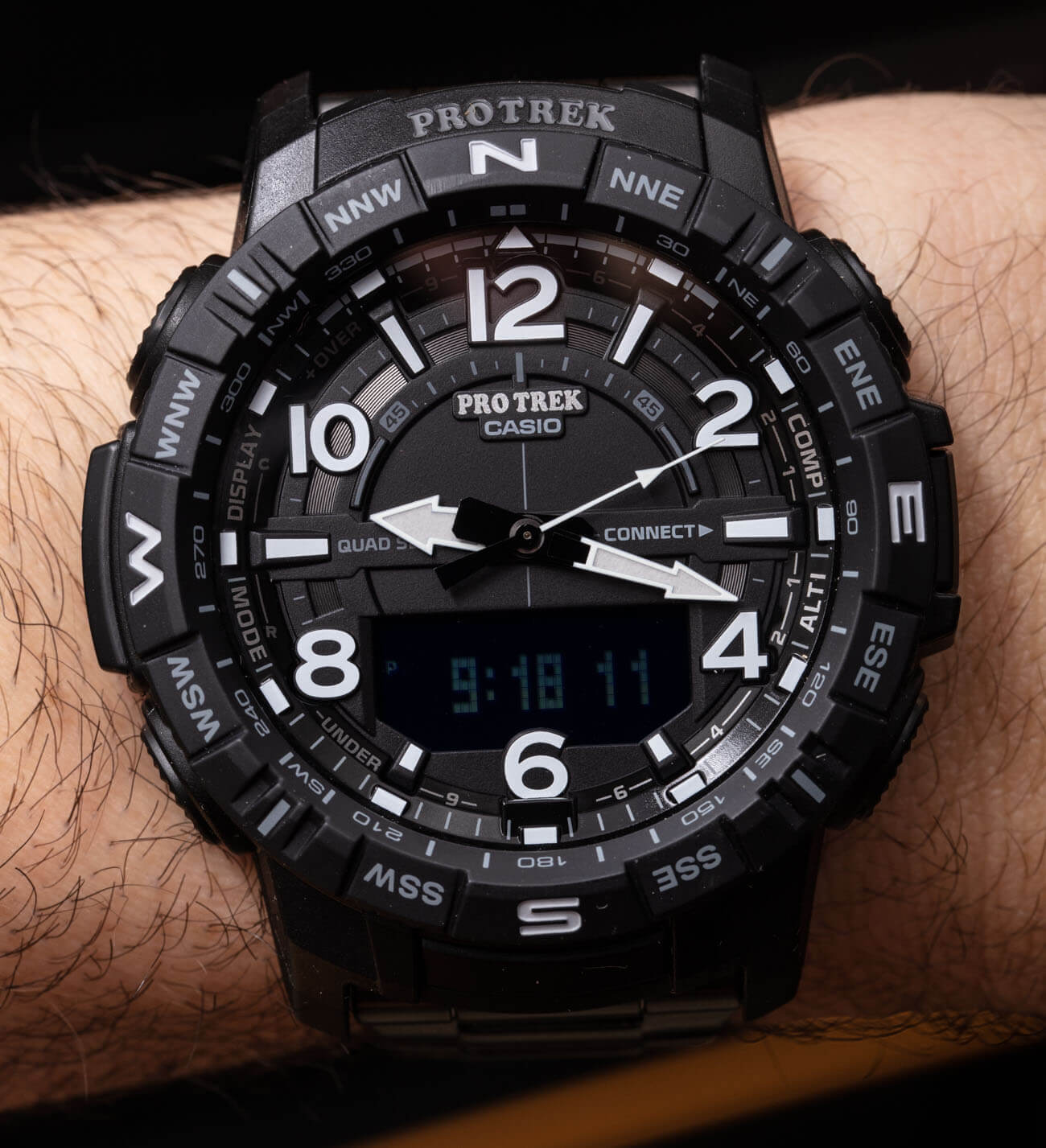 The Casio Pro Trek (previously Pathfinder) watch family is still going strong as the Japanese brand's well-known "hiking" watch. Today, I'll be looking at the Casio Pro Trek PRT-B50, specifically the PRTB50YT-1 in black with a black titanium bracelet. Even within Casio, Pro Trek's domain has diminished due to G-Shock models that, in many respects, overlap with Pro Trek models in both functionality and aesthetic. Only Pro Trek models, as well as several of Casio's hybrid analog/digital displays, used to use "ABC" (altimeter, barometer, compass) sensor technology. At the same time, Casio is offering both the Pro Trek PRT-B50 and the G-Shock Mudmaster GG-B100, which share the same “module” as the G-Shock Mudmaster GG-B100 (the term Casio uses for its movements). Furthermore, the Mudmaster GG-B100 and the Pro Trek PRT-B50 on the black titanium bracelet have the same retail price as specified. Customers will understandably be perplexed as to which model is best for them.To be honest, the base model Pro Trek-B50 is substantially less expensive at $220, however this variant with the black IP-coated titanium bracelet is more pricey. The G-Shock Mudmaster is the more expensive model, thus the case is more sturdy and wear-resistant as a result (though it is larger). 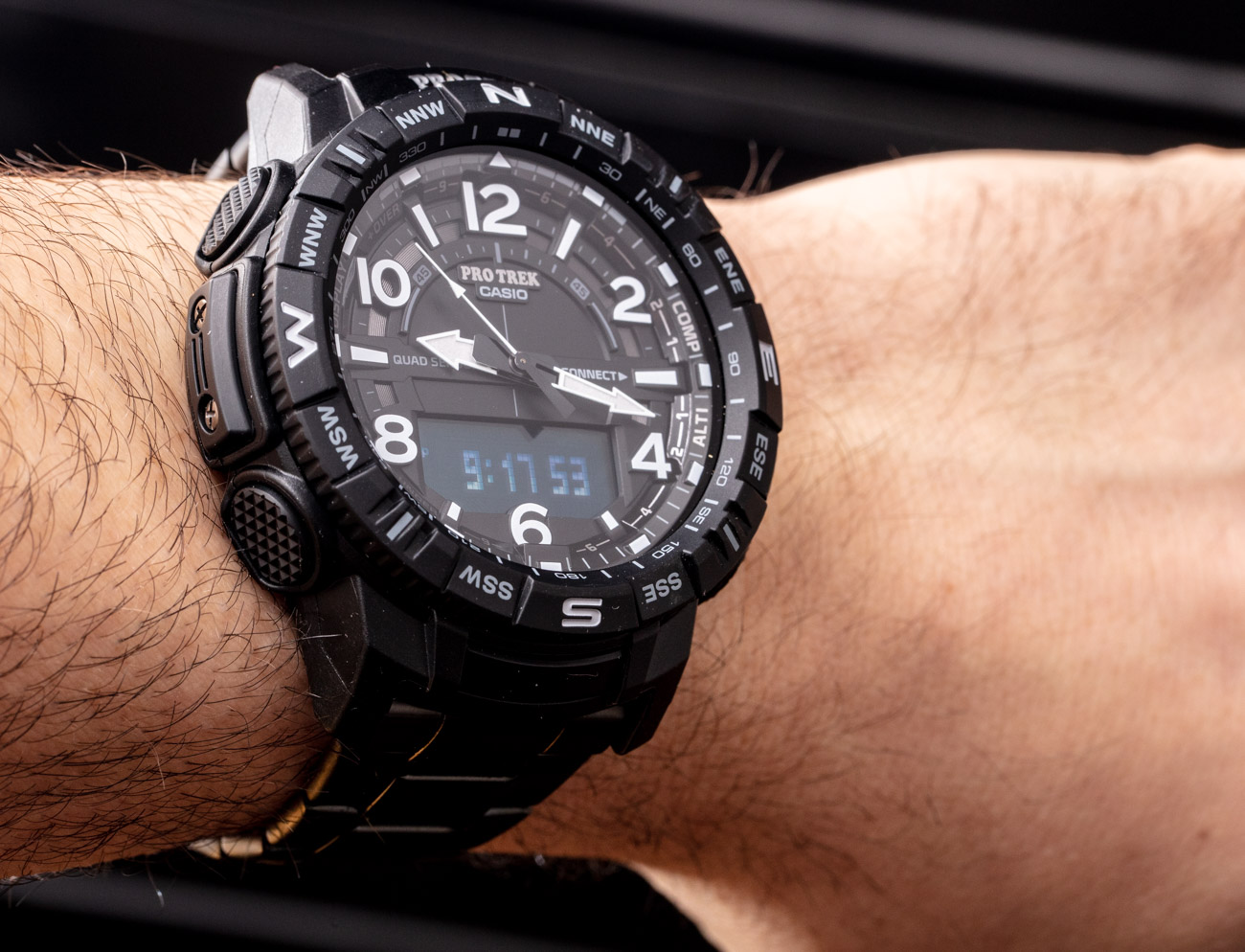 Much of the Pro Trek PRT-B50 review is devoted to comparing it to the Mudmaster GG-B100... Finally, unless you have a specific requirement for a feature in one of the two watches, the choice is a matter of personal preference and design. The Pro Trek model outperforms the G-Shock in this area. To begin with, the Pro Trek is the thinner of the two watches, measuring 50.8mm broad and 15.8mm thick. It also features a spinning navigational bezel, although to be honest, that isn't that practical, especially since the module already has a compass built in. The Pro Trek is also a lighter watch, which is noticeable even while wearing the titanium bracelet. The watch is only 64 grams in total. It doesn't feel like anything is there on the wrist. Finally, because to the dial's high-contrasting and very easy-to-read hands and hour markers, the Pro Trek PRT-B50 just edges out the G-Shock Mudmaster GG-B100 in terms of legibility (both of which are painted in luminant). It's also true that if you want a G-Shock with a titanium bracelet, you'll have to pay a lot more than the PRTB50YT-1's retail price. Speaking of the bracelet, this is a novel design, and I believe it merits some debate due to its clever engineering. 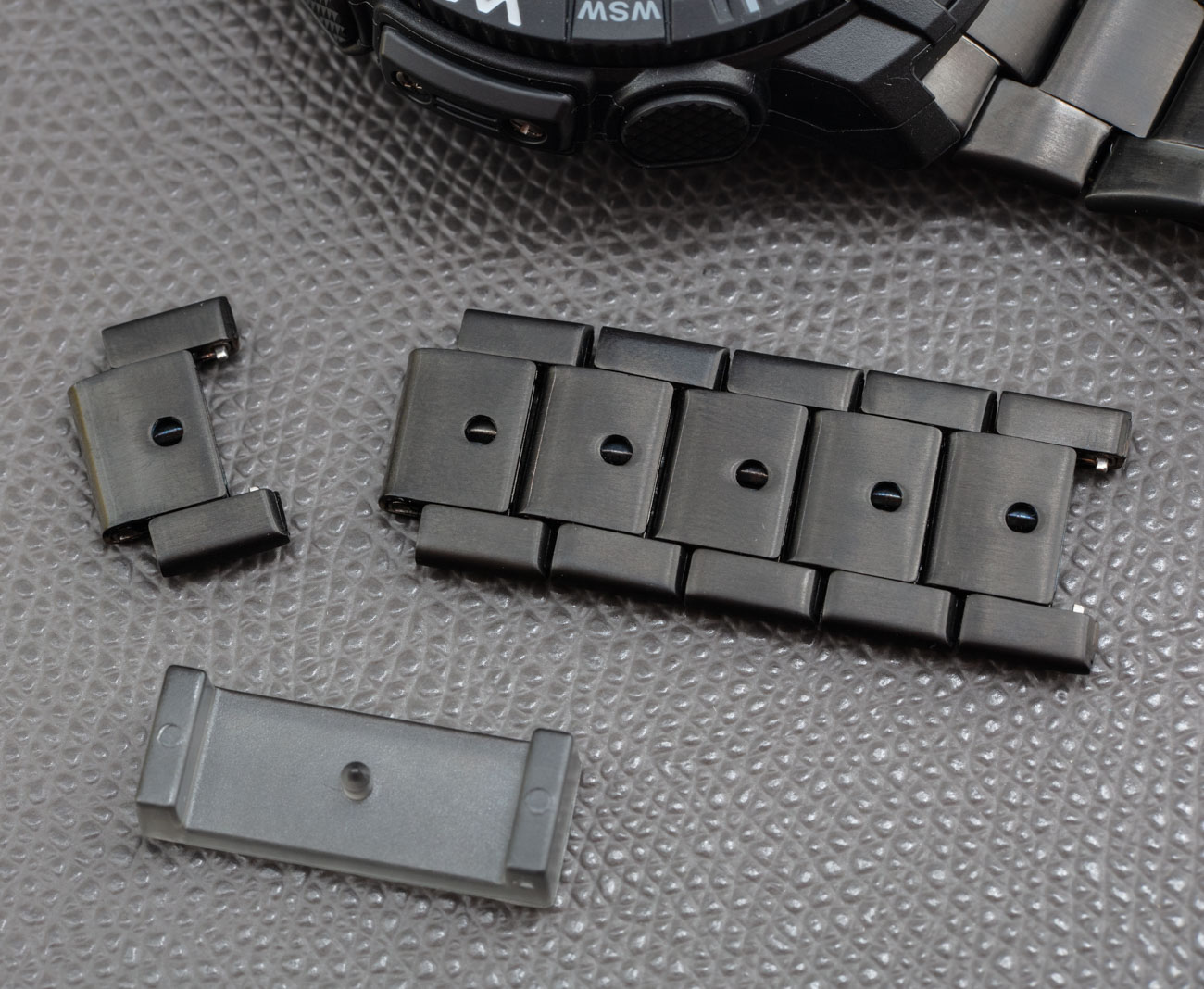 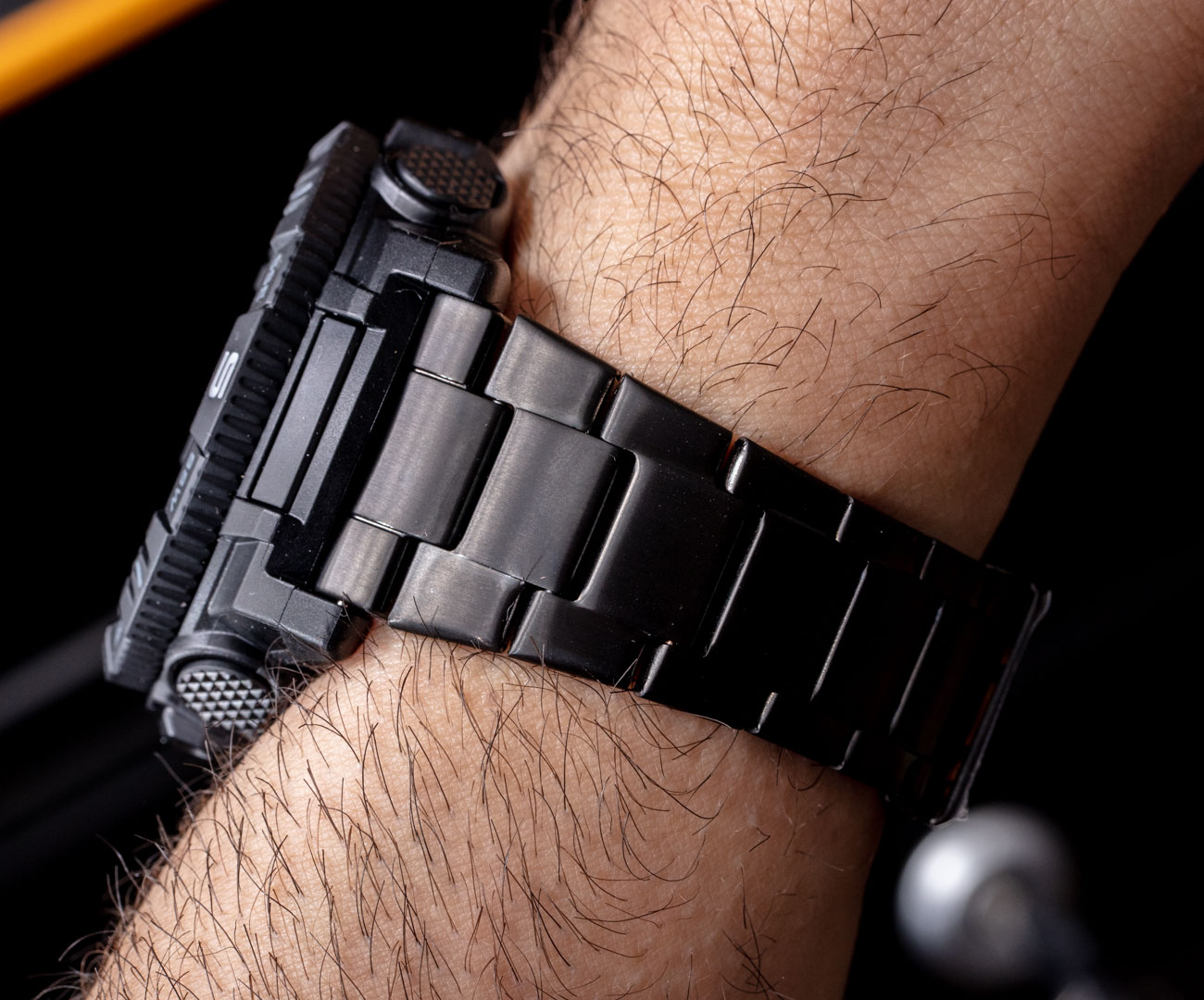 The bracelet has two disadvantages. The first is that if you have small wrists like mine, the way the bracelet connects to the case causes the case lugs to protrude a little. This isn't a deal-breaker by any means, but it is a flaw in Casio's design that I believe they might have addressed more elegantly. Second, the bracelet only allows for small micro-adjustment (just one extra spring bar hole in deployant to help ideally size the watch). I believe the sizing options for the bracelet will fit most wrists; nevertheless, being a sports watch, the Pro Trek should be worn firmly enough to keep it from moving around, but not so tight that it restricts your wrist's movement. The nicest part is sizing the bracelet because Casio designed a brilliant system that does require a tool, but if you don't have one, whatever you already have might easily double as a tool to release the straps. This new link design, I believe, also allows the bracelet to be thinner while keeping a high level of structural stability. No, this strap will not be as durable as a G-Shock, but I feel it will suffice for the great majority of applications. The watch comes with a small plastic tool that allows you to press down on a secret pusher on the back of the case. As a result, both hold pins in the link retract, allowing it to separate. You can go from a fully unsized bracelet to a sized one in under a minute if you know what you're doing. This is particularly impressive considering that most other bracelets require a specific spring bar removal tool, steady hands, and patience, as the full process can take up to 15 minutes, depending on how correct your sizing estimations are. Take note of how small and unobtrusive the fold-over deployant clasp is. I should also highlight that the Pro-Trek casing is designed to accept several aftermarket 24mm-wide straps, in addition to the bracelet's quick-release end links. (G-Shock watches usually don't have replaceable straps, and if you do, you'll have to buy new ones built specifically for that case.) 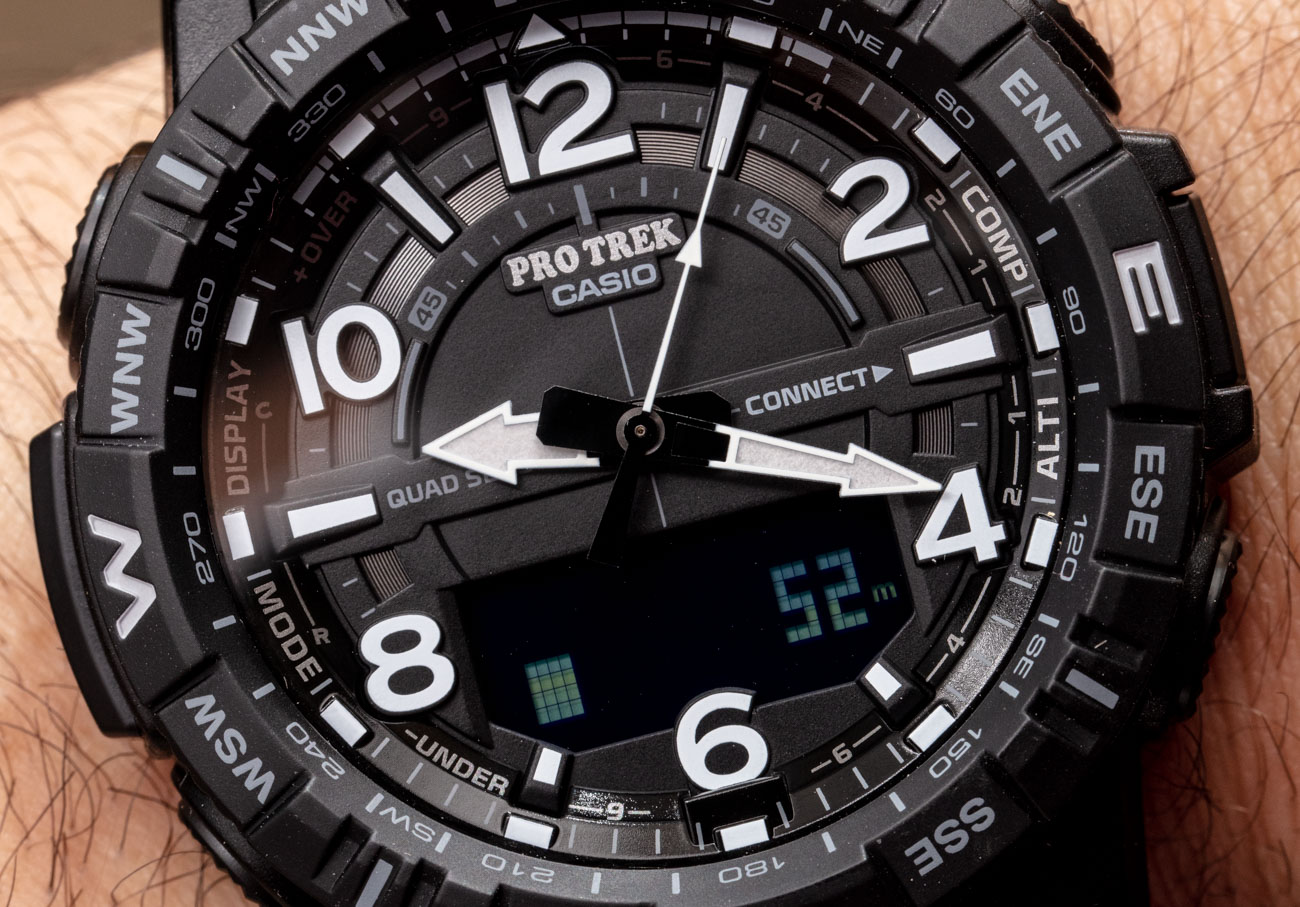 The rest of the Pro Trek PRT-B50 casing is made of matte black resin, which now extends partially over the caseback for further durability. The Pro Trek features 100 meters of water resistance, whilst the G-Shock has 200 meters. The rotating bezel's height is also intended to shield the crystal from unnecessary shock. The case is appealing in its own right, but in a way that has always been more conservative than G-Shock. The larger G-Shock-style pushers are simple to operate, although there are plenty of them on the case (six in total). The bottom center pusher on the face of the case, which enables the backlight, was likewise left unlabeled by Casio. The pusher virtually blends in with the case design, and I can imagine people wearing this watch for months or even years without realizing it has a backlight feature unless they are shown where it is. The only functional drawback of the module in the PRT-B50 (the Casio module 5601), as with the sister G-Shock Mudmaster GG-B100 watch, is the lack of solar power production. This would have greatly increased the watch's autonomy. This isn't a significant concern because the battery is supposed to last two years on average and is a CR 2025 cell, which can be found in most places (and isn't one of those difficult specialty battery sizes).

For the money, I enjoy this module because it includes all of the Pro Trek capability that consumers have come to expect, as well as some more modern features like Bluetooth connectivity. You can have your phone automatically adjust/update the time and configure items on the watch, such as the alarm, using the G-Shock app. Casio watches are getting more and more “Mobile Link” via Bluetooth, and it's excellent that it's already being widely rolled out on even more entry-level models. Casio refers to the Pro Trek PRT-B50 as a "quad sensor" watch since it has a step counter in addition to the altimeter/barometer, compass, and temperature found in previous-generation Pro Trek watches. Despite being a lightweight activity tracking wristwatch, the PRT-B50 may be used as a simple semi-smartwatch activity tracker or just as a step counter (pedometer) without the need for a phone. In this aspect, I like Casio's Bluetooth strategy: utilizing Bluetooth with your watch is currently optional and not essential for much of the watch's basic functionality on most models. 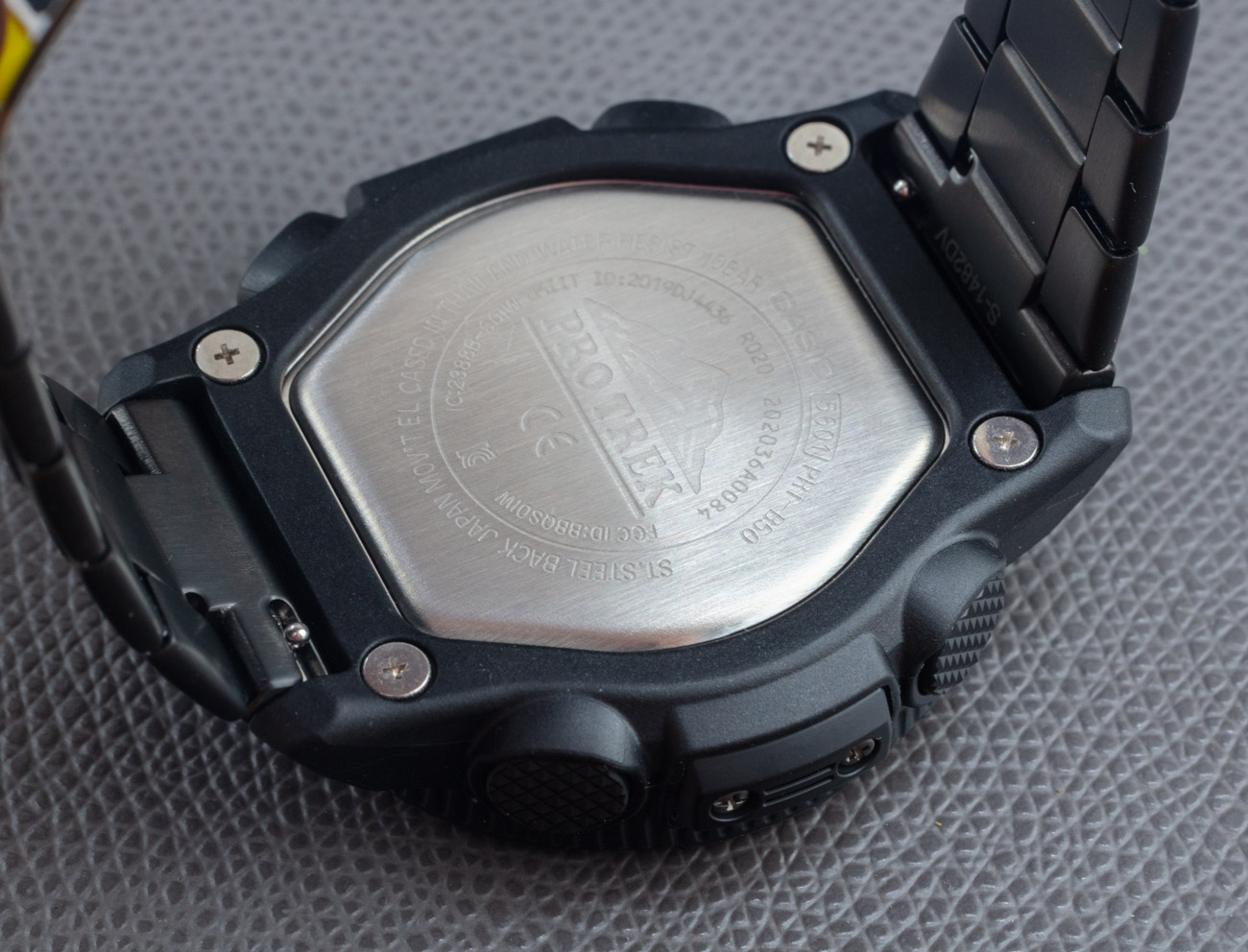 Despite the fact that the little negative (as dark screens are known) LCD display does not take up much space on the PRT-B50 dial, it is something you'll use frequently. That said, I enjoy how this Pro Trek appears to be a fully analog watch from a distance. The clock, calendar, steps, or a barometric pressure graphic can all be displayed on the default screen (for weather prediction). The altimeter and compass features may be rapidly activated using dedicated pushers on the casing. The seconds hand is repurposed as an analog indicator, similar to the compass needle. The system has been fine-tuned and performs admirably; it is also extremely quick in its execution. The legible dial, stylish yet conservative styling, and light weight and wearing comfort are what drew me to the Pro Trek PRTB50YT-1. I'm still not sure how to discern if a Pro Trek or a G-Shock is a superior choice, but Casio wins in either case. The Pro Trek PRT-B50 is the entry-level model, if you don't mind foregoing the titanium bracelet (there is a non-black model, as well). Given that the bracelet design is both novel and not provided in this affordable form in the G-Shock line, the watch is still a fantastic value with the bracelet.