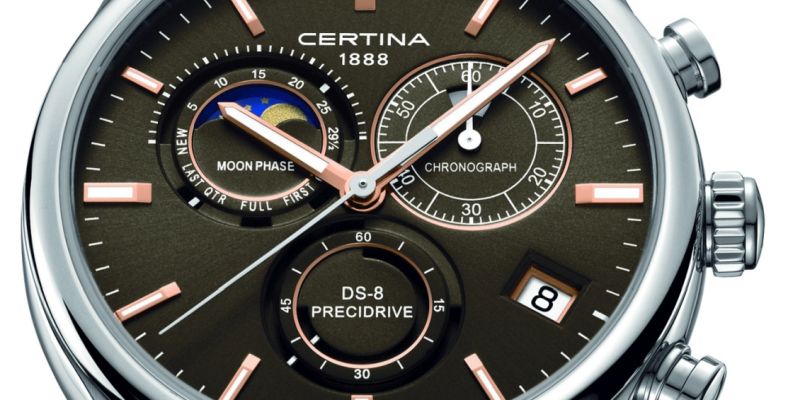 During Baselworld 2015, Certina unveiled the Chronographe DS-8 Process de Lune for the first time. It's a great example of a dressy "complication" watch that manages to combine an almost beautiful exterior, a dependable quartz chronograph movement that, for all practical purposes, blows almost all sophisticated electric mechanisms currently available on the market out of the water, and a very inexpensive price into a single package. What more could you ask for?

I'm not sure why Certina likes to use computer-generated images to accompany their press releases; they never do their timepieces justice, and the latest DS-8 Phase de Lune is no exception. Although the photos give you a decent idea of how the device looks on the outside, it looks much better in person, and I am confident that a skilled photographer will be able to capture its natural beauty. 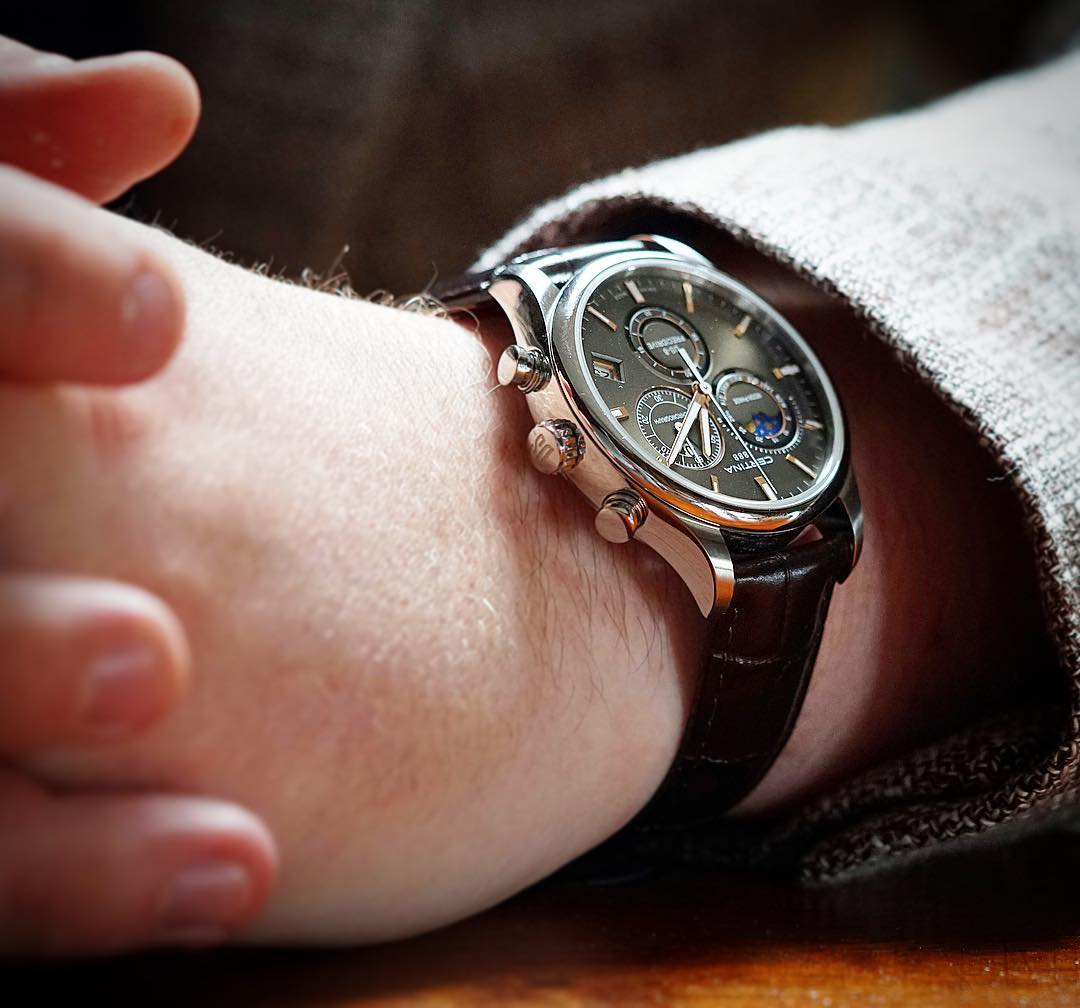 With its soft, noble color scheme and pleasant textures, this gadget makes a strong impression, reminding me of Patek Philippe timekeepers in terms of layout and general, um, aura. All is designed with great care and attention to detail, with all of the parts working together to provide an experience you wouldn't expect from a quartz-powered timekeeper from a company that claims to be "inexpensive" (and thus uninspiring).

The length of the hour and minute hands in comparison to the diameter of the dial cutout is probably the only thing that irritates me a little.

The quartz movement in the DS-8 Process de Lune isn't your run-of-the-mill affair that you'll find in most throw-away timepieces with Mickey Mouse on the dial. This one has an ETA G10.962 BH PRD Precidrive mechanism, which is part of the company's well-known Thermoline family of electric movements. The Thermoline sequence, which Breitling likes to use to power their analog/digital chronographs (that says something, right?) typically provides an unparalleled degree of precision that is about ten times better than a standard quartz mechanism.

The mechanism is powered by a conventional battery (I'm surprised ETA doesn't have a movement that runs on solar energy), and it has a theoretical autonomy of just over three years, but that could be dramatically reduced if you misuse the chronograph sub-system, which is normally very taxing on the battery. 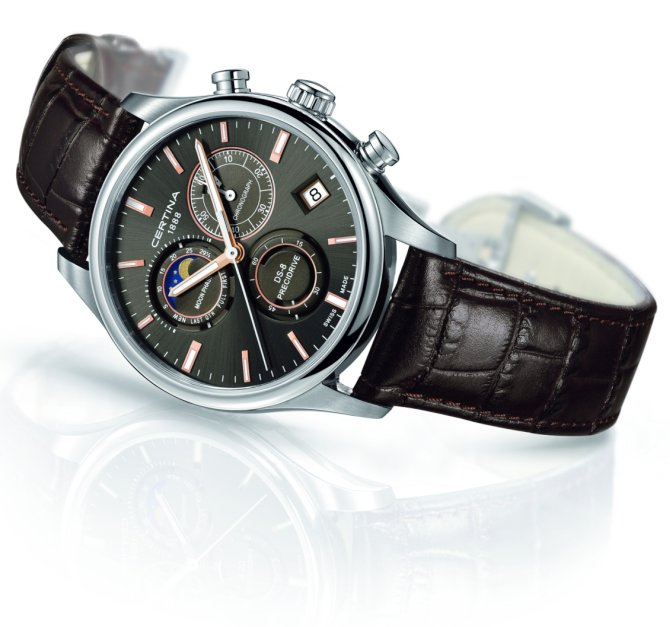 As is customary, a manufacturer may add a variety of complication modules to the base movement to significantly improve its functionality. This model includes not only the regular chronograph, a simple calendar at 4 o'clock, and a standard-looking moon-phase display, but also a "average duration of lunar period" indicator, which, while not particularly useful, might be of interest to those who prefer a watch with a little more complication.

First and foremost, the case is much better sculpted than these photos suggest: the bezel is smaller, and the crown has a much better grip than it does in these photos. It's a little bigger than the regular dressy three-hander at 41 millimeters in diameter, but it's actually smaller and thinner than an automatic timekeeper with the same complications. 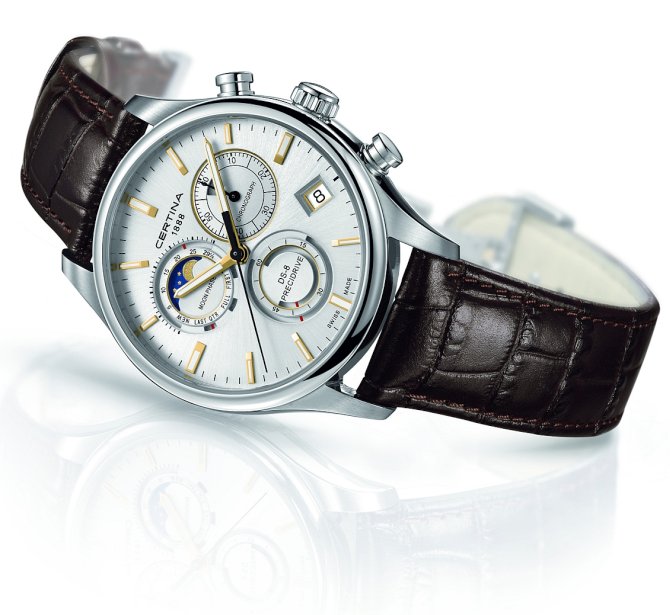 However, bear in mind that the horns, which come with a lovely brown leather strap (a stainless steel bracelet is also available if you prefer) are very long, measuring approximately 50 millimeters from lug to lug. While that is not a long piece, you should be aware that if you are on the thin side, the piece can cover the entire width of your wrist (and then some).

On the other side (and while we're on the subject of justice), the case isn't as well-finished as the guy who approved the renders would have you believe. Unfortunately, machine-brushed surfaces lack the degree of refinement that you might expect from a dial. It is precisely there that you can see that this is a CHF 765 (CHF 795 for the bracelet version) dressy chronograph from a major brand, not a ten-fold more costly dressy chronograph from a major brand.

Some of you might be turned off by this minor error, but I don't think it's a problem: while you typically get what you pay for, you get a lot more here. Certina has shown once again that it can compete with brands that are more well-known and demand higher prices. I really don't want you to have unreasonable expectations: this isn't a Patek Philippe or an IWC. It's a Certina, and it's expected to fit into the price range that the marketing guys assigned it to, which means cutting corners more frequently than I'd like.

The clock, on the other hand, is where this timepiece really shines. It shines not just because of its PVD-treated components, but also because of the way they're all put together.

Despite the large amount of data to process when looking at the dial, the data is well-structured, so you won't feel frustrated. The PVD rose gold-plated hands stand out against the dark setting, which comes in black or dark grey (you can even call it anthracite). The sunburst finish on the version with a silver-toned dial still provides enough contrast for the hands, making the product appear more costly.

The dial is visually light, but not too, well, empty, as is often the case when a brand puts a tiny movement into an oversized body and attempts to persuade you that it doesn't look dumb. All is in great order here: the industrial designers who worked on this device did an excellent job.

As I previously said, I dislike the length of the hands: they seem to be a fraction of a millimeter shorter than they should be, but all else appears to be in order. The hands and hour markers have a sufficient amount of lume, which not only makes it easier to read the dial at night but also makes the elements stand out more in bright sunlight.

The fact that the whole assembly is protected from dust and moisture by a beautiful sapphire crystal makes it even sweeter.