In New York, back in 2017, Glashütte Original debuted a brand new limited edition series of chronographs, the Iconic Sixties Square, amidst an unexpected but fitting flurry of snow. The watch is available in five different colors and styles, each with a squared-off cushion case and a bright dial. These are very similar to what the Sixties collection has been doing for years, but they offer something a little different and special. Here's a sneak peek at the new limited editions, complete with pictures and pricing.

The Sixties collection is exactly what it sounds like: a collection of timepieces inspired by Glashütte Original's work during the crucial decade of Soviet occupation. The resulting timepieces feature funky curved numerals, slim cases, and just enough color to make them stand out. These new timepieces follow in that tradition. 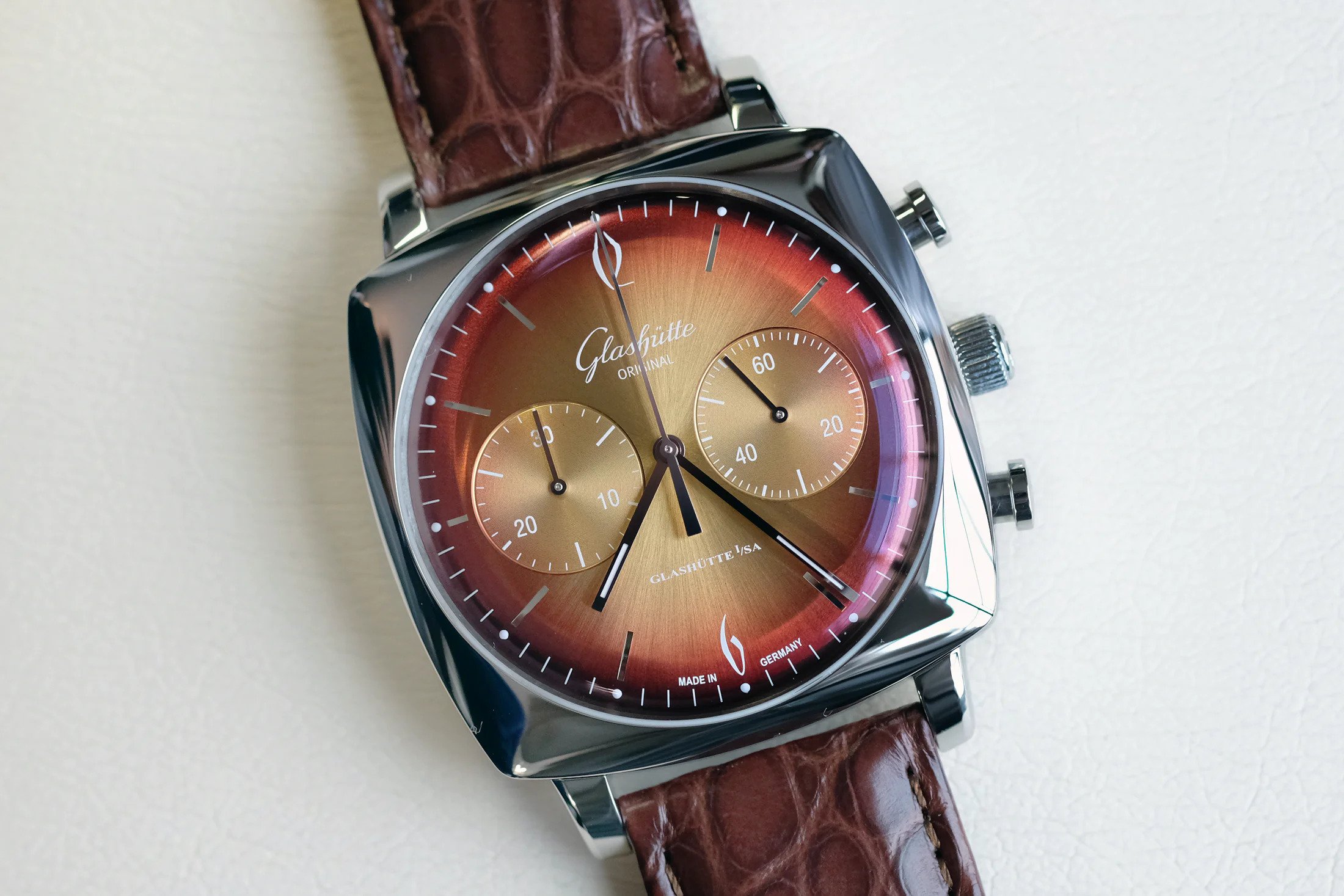 The Sixties Iconic Square is a two-register chronograph with a stainless steel cushion case measuring 41.35mm square. On the right side, mushroom pushers flank a grooved crown (nothing special there), and the cushion's edges slope down from where they meet the crystal, giving it a sculptural feel. The dial is very large for the case size, measuring 41mm in diameter, so there is only a small amount of metal at the edges. It's a good impact overall. The dials, on the other hand, are the focal point of these clocks. They come in five different colors, Ocean, Tangerine, Fire, Forest, and Graphite, despite the fact that they are blue, orange, red, green, and grey. At 12 and 6, there are those Sixties numerals, as well as a running seconds sub-dial at 3 o'clock and a 30-minute totalizer at 9 o'clock. The fact that both registers are on the big side helps to balance things out nicely. The dials have a unique color scheme. They're layered sunburst effects with color fading, so they've got a lot of variance as you tilt and play with the light. The intensity of the effect varies by color, with orange being the most dramatic and blue being the most subdued. The grey dial, on the other hand, is quite different. It has a textured finish that is accomplished through a unique process that includes a stamping procedure in addition to galvanic and airbrushing treatments. All of these dials are manufactured in Pforzheim, Germany, at GO's own dial factory. You can only see the added dimension if you look at the watch from the side. These dials have been domed, with curved hands and a domed crystal added by Glashütte Original. When you're not looking at the watch directly, the effect is particularly noticeable. I particularly like how the crystal reflects light off the dial at odd angles, highlighting the color treatments. This is one of those small details that elevates the watch to a new level. Glashütte Original's in-house caliber 39-34 powers the watch. This is a 40-hour power reserve automatic chronograph caliber. The watch runs in 51 jewels and has a solid 21k gold winding rotor with the skeletonized double-G logo. It's essentially the highest-end version of Glashütte Original's base caliber 39. I wish it was a column-wheel chronograph, but it does have stop-seconds and a fine balance adjustment mechanism, so it's not all bad. The Sixties Iconic Square is, to put it mildly, a lot of look. Not everyone will like these watches, and not everyone will have the right wardrobe and/or swagger to wear a tangerine sunburst cushion chronograph. That's all right. These are being produced in small quantities and are clearly aimed at a customer looking for something a little funkier and louder. And I believe that the customers who do receive these watches will be extremely pleased with them.