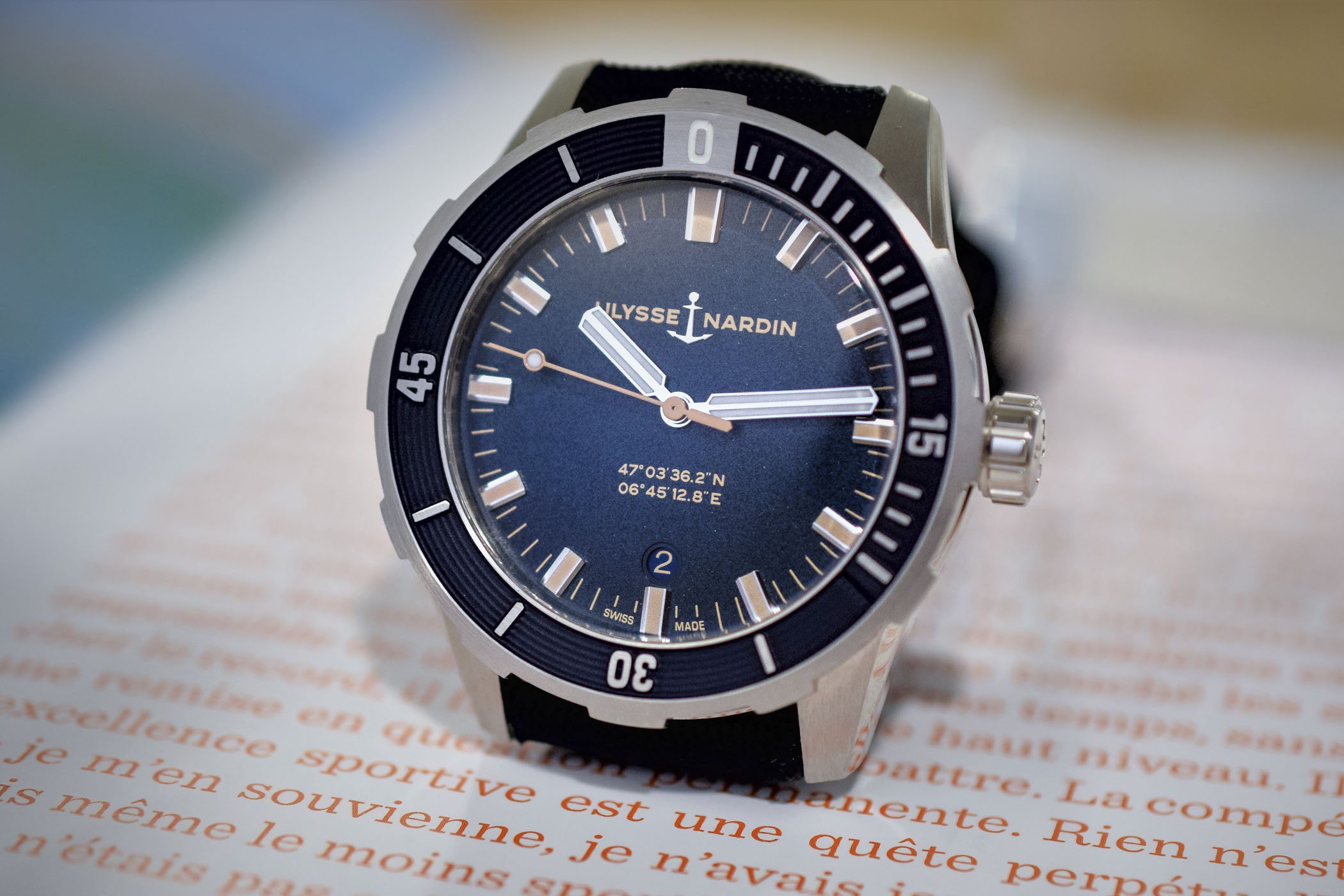 Ulysse Nardin builds on the popularity of their Diver Chronometer 44 range, which was launched as a 2018 year model at the end of 2017. The Chronometer was well-received not only by bloggers and knowledgeable critics, but also by people who could afford a watch that costs $8000-$12,000 USD, so they decided to make a more basic version. 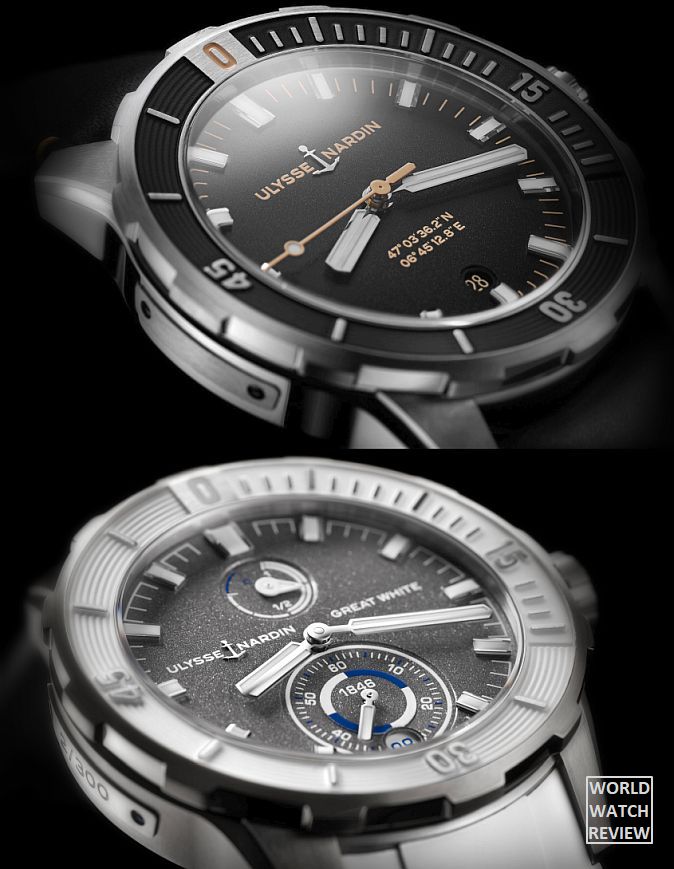 The case is “medium-sized” by modern standards, measuring 42 millimeters in diameter, and should comfortably match an average wrist.

The Diver Chronometer on which this model is based is around two millimeters smaller. Ulysse Nardin sought to make switching between the three-hander and the chronometer as seamless as possible, recognizing that some of their customers would like to use both versions in their weekly rotation. Both models appear to be identical in terms of profile, exterior, and finishing touches (the case even comes with the same plaque on the right side of the case as the limited edition model, although, for obvious reasons, the plaque is left blank.) 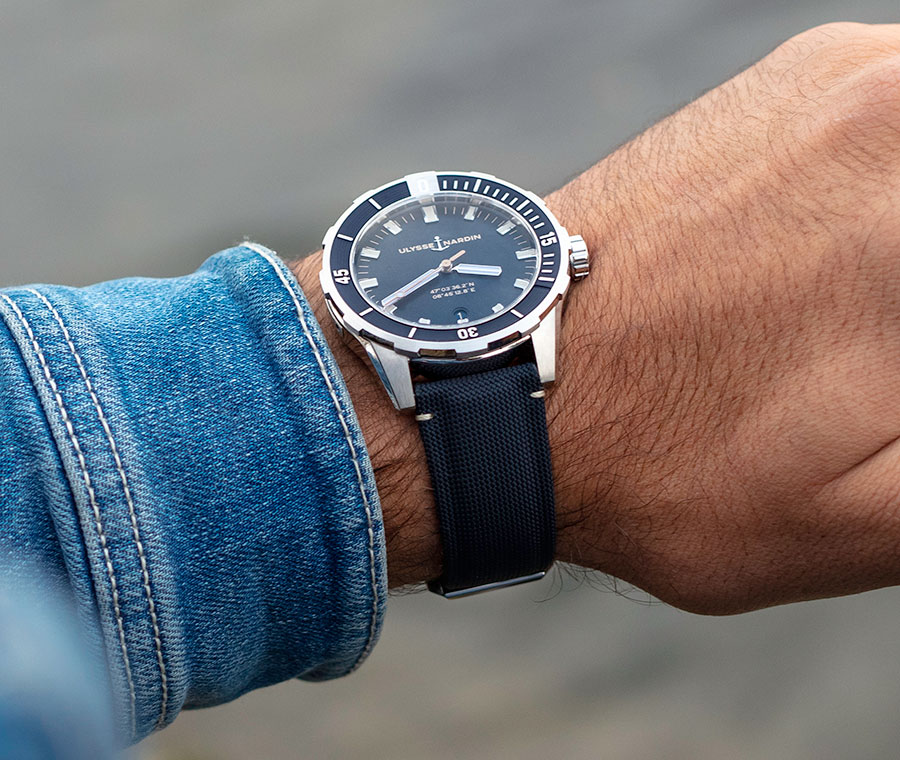 The latest Diver 42, unlike their previous divers, lacks a series of crown guards, making the crown exposed to occasional shocks. This appears to be a small price to pay for the visual lightness and overall minimalistic look, unless you want to use this timekeeper as a "action" or "tool" watch. It also distinguishes the Diver 42 from other luxury divers.

The bezel, too, was created with aesthetics in mind, but it appears that its exquisitely sculpted form can provide a strong grip when (and if) you plan to use the Diver 42 as a very expensive egg-timer at some stage. The Superluminova is the only thing I'm missing here. Even though it is typical for dressier divers to fail in this department, the Swiss brand's product designers might find a place for just a small single drop of a luminous compound to serve as a point of reference for those common occurrences when one needs to read time at night. The power reserve indicator in the upper half of the dial acted as a direct reference point for where the 12-hour marker could be found on the Chronometer 44, which this watch is intended to accompany on store shelves. 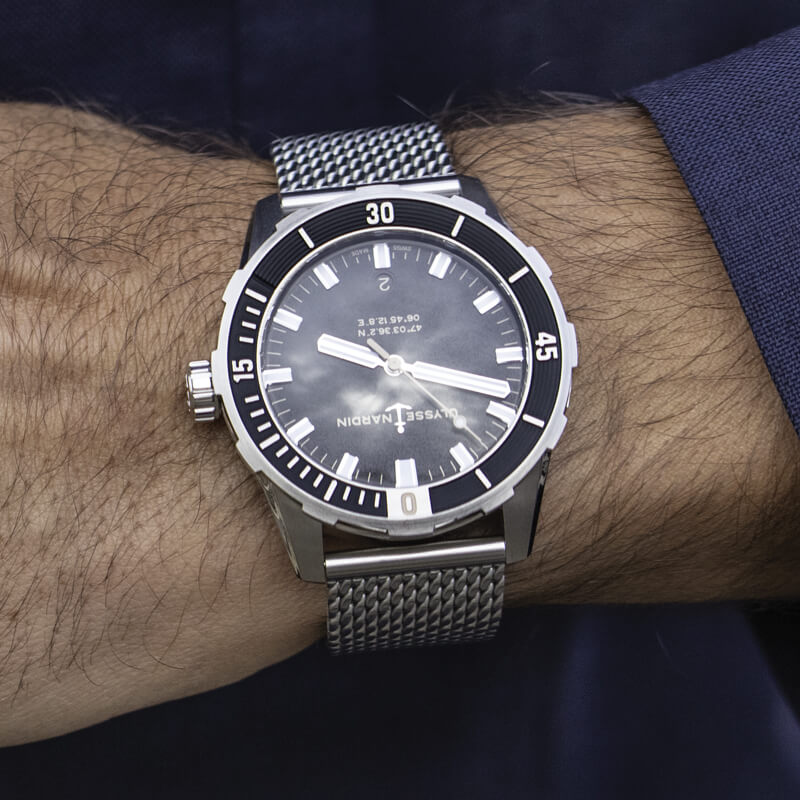 The variety of straps available is delectably rich. According to official specifications, it will be available not only with the traditional steel link bracelet or the fashionable NATO-style fabric harness, but also with a luxury leather band and, my personal preference, a magnificent steel mesh bracelet that appears to be the best option for a black dial edition.

Ulysse Nardin used slightly changed versions of the then-ubiquitous ETA 2892-A2 automatic movement in their earlier three-handers. They were the obvious option when you wanted to create a luxury watch that wouldn't cause problems for your service partners during (and long after) the warranty era. However, after ETA SA drastically decreased the number of calibers it sold to third-party brands, the mechanisms became more difficult to come by, prompting Ulysse Nardin to turn to a "generic" variant of the movement.

Caliber UN-816 is the name given to this version of the mechanism. The mechanism is simple and inexpensive to service and is as effective as a hammer, beating at the same 28,800 vph, assembled on 25 jewels, and providing a regular power reserve of 42 hours. It was also tweaked to meet the UN's higher expectations. 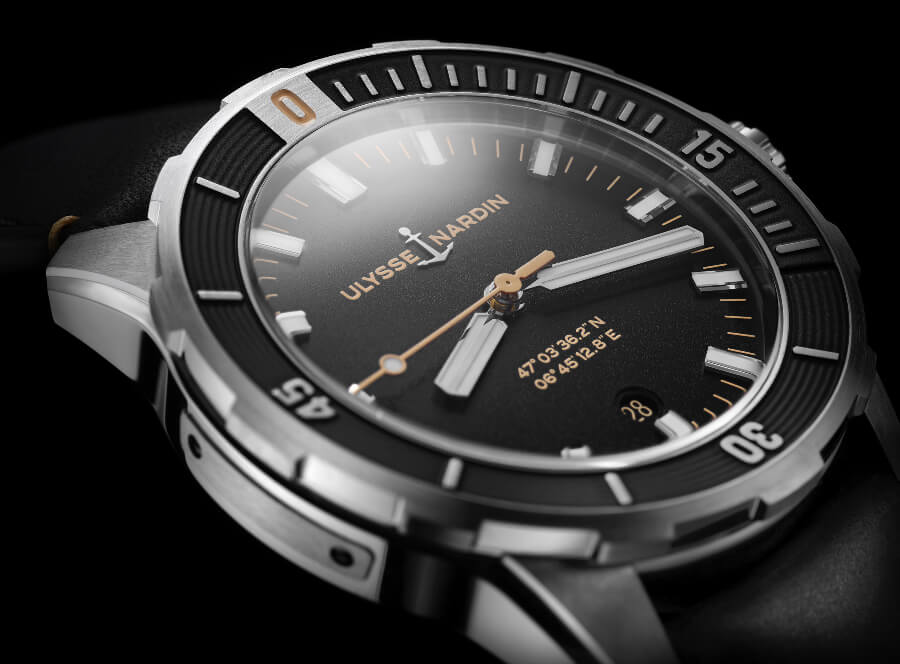 Ulysse Nardin didn't have to worry about their timepieces' "value for money" a decade ago: there were hundreds of thousands, if not millions, of people with more than enough money to spare for a piece of conspicuous consumption if it had the right brand name on the dial (or radiator grille.) But, when the majority of these people were figuratively strangled, gutted, decapitated, or murdered in far more exotic ways by Adam Smith's invisible hand, selling watches without a clear "plot" (or, at the very least, a specific movement inside) at a substantial markup became a lot more difficult.

Some brands, such as Breitling, were able to adapt quickly by creating their own "easy" calibers, while others went out of business. Ulysse Nardin wanted to play with their ace in the hole and modify a third-party mechanism with costly silicon parts, something it has a lot of experience with since the release of the stunning Sonata Silicium Limited Edition in 2008. Although the improved parts would not turn the modest workhorse movement into a working man's Rolex cal. 3135, their extremely light weight, wear resistance, and intrinsic antimagnetic properties will greatly improve the SW300's value. 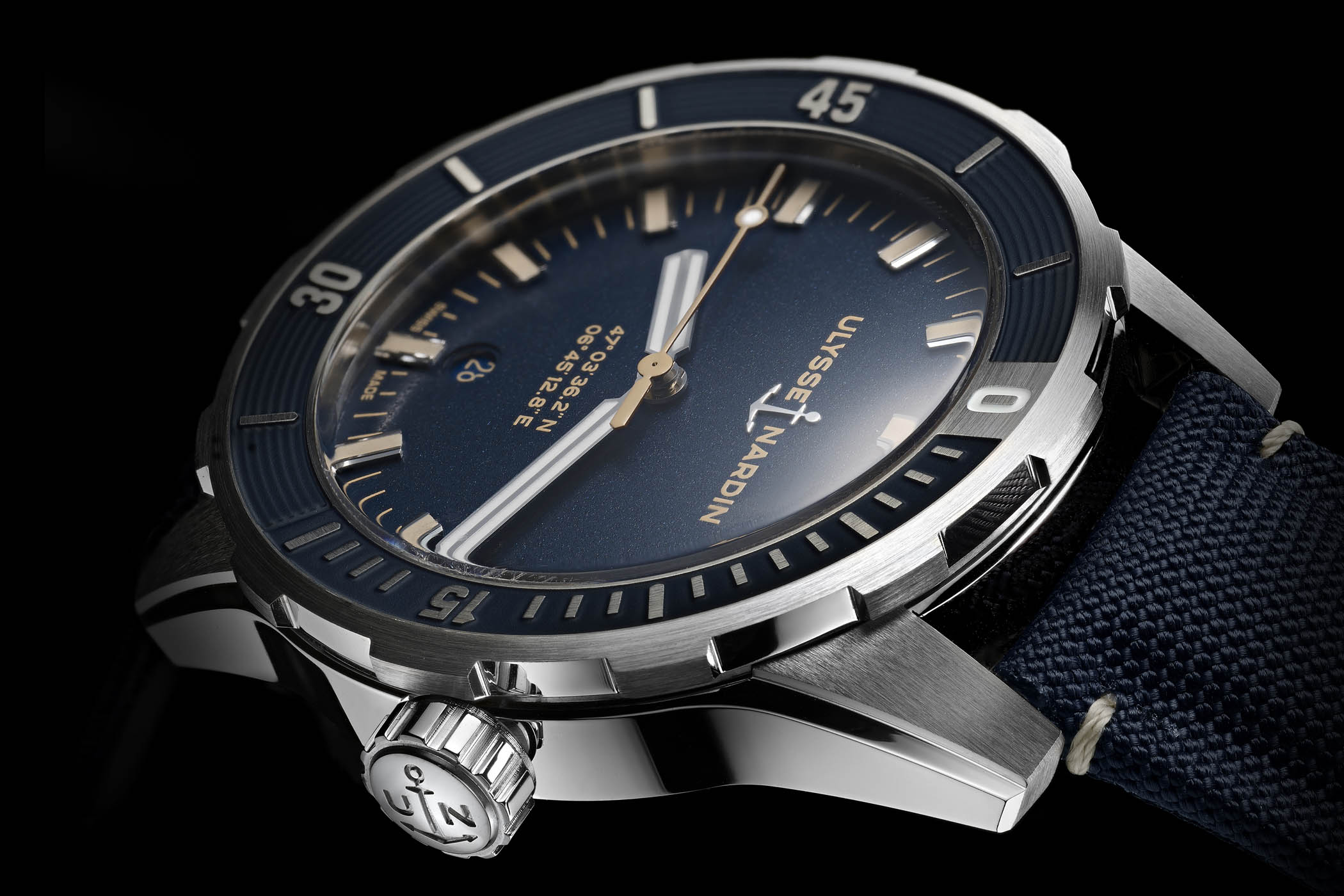 What I like about high-end watches is that most of the companies that market them don't try to save a nickel here and there to boost their profits. The watch's exterior dimensions were reduced by around 5%, and Ulysse Nardin may have used the same set of applied hour markers to decorate the dial, but it seems that they chose to make a large number of new ones, which were proportionately reduced to better suit the slightly smaller dial opening. The circular aperture for the simple calendar is even smaller than on the aforementioned Diver Chronometer, though the date function's readability suffers slightly. 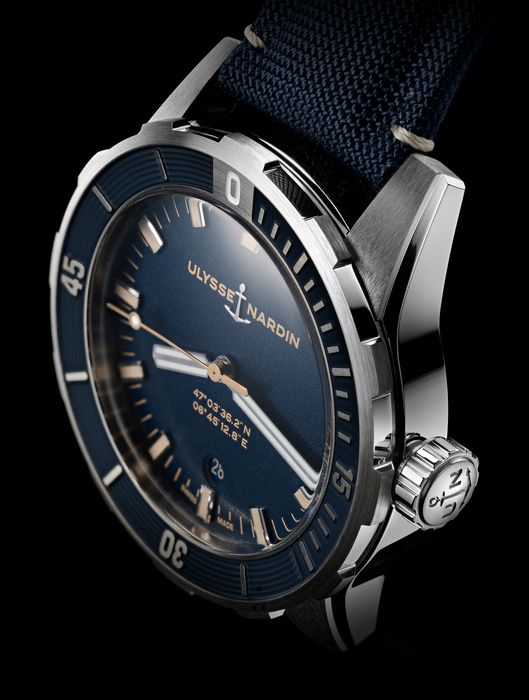